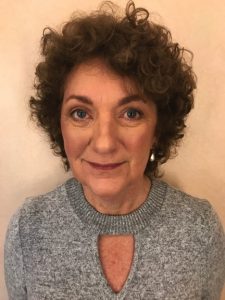 Patrice Boyer Claeys grew up in Pennsylvania, graduating from the University of Pennsylvania and the University of Manchester, U.K. Her first book of poems, Lovely Daughter of the Shattering was followed a year later by The Machinery of Grace in 2020, both from Kelsay Books. She has been nominated twice for Best of the Net.

This is a gorgeous book, made entirely of lines taken from other poems, but absolutely clear in its unified voice. I can’t see how she did it!

The book is in three sections, the first about the death of the speaker’s mother, the second a return to the past and movement forward again into grief, and the third a rebirth of joy. The opening and closing stanzas of the first poem will give a feel for the success of her technique:

Longing consumes us
from skull to tailbone.
And the sound of our deepest voice
rattles the long throat of the horizon.

Between us and the sun
is the wheel that brings it round,
and what I hear is my whole self
hard as the earth, sheer, present as the sea:

Though this poem is a mix of words from eighteen poets listed at the back of the book, it reads as confident and coherent. The poem begins and ends in longing, in an acknowledgement of the certainty of death, and of our desire to stop things from “always falling.” The most striking aspect of the poem is its voice, beginning in first person plural, and switching seamlessly to “I.” The voice has a powerful, declarative stance: “what I hear is my whole self/ hard as the earth, sheer, present as the sea.”

In “Bedside Vigil,” the first poem’s longing is echoed as the speaker watches her mother fade away:

What I can tell you is
death also stopped,
fanned out like wings under her arms
moving between the first world and the second
into time, flame. (18)

Oncoming death pauses, and her mother is suspended between living and dying, winged between those worlds. The word “flame” picks up the previous word “fanned,” just as “time” reflects the earlier “stopped.” Claeys has assembled lines that speak easily to each other. But she’s also arranged the kinds of discontinuities that make poetry live. Death fans out like wings, and moves into flame.

The second section of the book moves back in time to her mother as a young woman. In “My Infant Self Gives My Mother a Gift,” the speaker describes her own birth:

As she shrugged childhood,
broke from the shadows,
a dull pearl—
my face—
became a living touch,
and they laid me on her, breathing. (26)

In a mix of the metaphoric and the literal, childhood is shrugged, and breaks from the shadows, not just coming into light, but becoming corporeal. The image of the pearl precedes the image of the face, metaphor leading the way into the real. The face becomes a touch—a curious phrasing that emphasizes the way children’s bodies become intimately connected to their mothers’ hands. And then the last line finally clarifies that we’re talking about birth. Writing one long sentence, and withholding the key information until the end, Claeys forces us to suspend understanding and see the childhood, the shadow, the pearl, the face, the baby—the difficult and subtle progress from child to adult to mother.

In the final section of the book, the grief that has absorbed the speaker begins to lift, and other family members and romantic partners appear, in a happier world. “Plenty” describes sexual pleasure with a gentle partner. It begins,

Ruched in your arms
with the heat of your body
softening further those parts where flesh
holds the wonders of the universe inside its mazy folds,
I thought my body would catch fire.

The heat and pleasure of the sentence change the tone of the book, make it move into a more blissful space, which it holds to the end. And astonishingly, the twenty-one happy lines of this poem are made of the words of twenty-one poets as diverse as Carl Phillips, Chase Twichell, and Natalie Diaz.

In the pandemic, it’s hard to stay close to others. Claeys has summoned a community of poets whose lines she has knitted together to form these poems of lasting grace.

Cammy Thomas’ first book of poems, Cathedral of Wish, received the Norma Farber First Book Award from the Poetry Society of America. It was followed by Inscriptions, and Tremors is forthcoming in 2021, all published by Four Way Books. She lives in Lexington, MA.