When they had been stuck indoors for a very long time, the children asked if they could play outside, just for a little while, and the mother relented because she wanted to be alone for a few minutes of her life. But the children hollered, Mama, we have no doors to get out! And the mother, who’d just laid herself down on the sofa, sat right up and said, That’s true! We forgot to put in the doors! And it was also true, she thought, what they said about “out of the mouths of babes.” What should we do? the children shouted, and the mother said, Can you open the windows? And after a moment they shouted, Yes! And it worked out for them, just using the windows to go in and out. 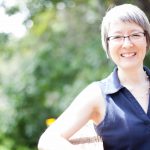 Naomi J. Williams is the author of Landfalls, a novel, and short stories and essays that have appeared in places like One Story, A Public Space, Electric Literature, Lit Hub, and Zoetrope. The recipient of one Pushcart Prize and a Best American Short Stories honorable mention, as well as fellowships from Hedgebrook, Djerassi, Willapa Bay, and the Sustainable Arts Foundation, she makes her home in Sacramento and teaches for the low-res MFA program at Ashland University. “No Doors” was a story written by hand onto origami paper then mailed in the spring of 2020 as part of her #PandemicPenpals project.