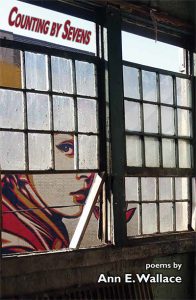 In recent months, my life has been crisscrossed by all sorts of wounds, from minor injuries that refuse to heal to the global fractures caused by inequality, racism, and most recently, coronavirus. Not that these problems are all that new–even the virus probably arrived earlier than we think. Still, we struggle to articulate them and we seek some form of response, as Ann E. Wallace’s début poetry collection, Counting by Sevens, reveals.

Divided into three parts, Counting by Sevens both exposes and embodies myriad aspects of the human experience. The first section, “America, Another Day,” often employs vivid imagery and arresting contrasts in poems that intertwine the personal and the political. The opening poem, “Valentine’s, Another Day,” sets ordinary celebrations of the holiday against Parkland school shooting, while “Cherry Picking” shows the speaker harvesting and eating cherries as she reads about the deaths of Black men. “Awash” provides an especially powerful juxtaposition between an orca mourning her deceased calf and a refugee mother separated from her child:

We marvel at her grief, so
human, at the compassion of killer
whales who keep her close, safe,
share the weight of her grief
and listen to her cry.

A mother from El Salvador mourns
her lost child for weeks unending,
her toddler taken, withheld, misplaced,
she swims alone, amid the lost mothers,
in their pool of manmade grief. (10, lines 6-15)

Many of these stories come from the periphery, with subjects who may or may not be named and who may not always be accounted for or known. Alton Sterling, Philando Castile, Michael Brown, Medgar Evans, Emily Roebling, lost tribes, dead slaves, anonymous refugees, Indigenous employees at a Mexican resort, her friends, her children are all embodied on the page.

The speaker too inhabits her body, which is often broken and ill, but also sometimes healthy and whole, as in “Girl of Summer,” the poem that opens “Interlude.” In this second section, childhood memories–lost teeth, skinned knees, proms–shed light on the speaker’s present as a mother with children of her own. Although this section is somewhat lighter, the peace suggested by “interlude” is not devoid of suffering in the form of illness, a burglary, divorce, dead sparrows, storms, a fallen tree. Light cannot exist without darkness, nor pleasure without pain, as the opening to “Piano Lessons” shows:

I learned pain at the bench of the piano.
My shoulders taut with tension, black pulses pushing up my neck,
knotting around my eyes as I sat upright, practiced scales and arpeggios
up and down the black and white keys,
my pleasure in the clean, even sound
pitted against the urge to buckle
under the pressure inside my head. (56, l.1-8)

The poem moves back and forth between pleasure and pain, playing and not playing, concluding with the rediscovery of the “pleasure of a precise / phrase, a tight chord, a balance / rediscovered between my two hands” (57, l.47-49). With this comes joy, a second chance: “I return to the piano / and teach myself / to play anew” (57, l. 54-56).

This does not last for long. The three “Vestibular Test” poems early in the book’s final section replicate the sensation of vertigo in both content and form. Is this what is meant by “Body rising,” the section’s title? Then again, “rising” could also mean “uprising,” the body and the speaker in revolt against each other. Or maybe the answer lies in “Commencement,” where the black graduation gown signifies both death–the speaker is undergoing chemo–and possible new beginnings. In the end, despite illness and fear, hope remains, both for the body and in writing, as “Faith in Narrative” proclaims:

I sat in seminars talking of literature and medicine, and
the magic that a brain performs to maintain the thread of life.
with a faith in narrative so fierce that we will inhabit
a Mad Lib of new signifiers rather than let our story die. (93, l. 9-12)

Wallace’s story is far from over. When this collection was published, she had survived ovarian cancer and was living with MS. More recently, she fought a months-long battle with COVID-19, during which she continued writing, including a poem a day in April and two essays for Huffpost Personal. It is a beautiful paradox that while writing and illness can be terribly lonely, sharing them with others can help everyone feel a little less alone.