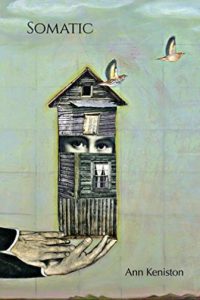 Ann Keniston is the author of two previously published poetry collections, The Caution of Human Gestures (David Robert Books, 2005), and the chapbook, November Wasps: Elegies (Finishing Line Press, 2013). She is the co-editor of The New American Poetry of Engagement: A 21st Century Anthology (McFarland, 2012), and the recipient of numerous fellowships and grants in poetry. Widely published in poetry journals, Keniston is professor of English at the University of Nevada, Reno and a poetry teacher in local schools.

In this dexterously crafted collection of poems, the reader is invited into the interior life of Anna O., the pseudonym of Bertha Pappenheim, an eminent feminist and social worker who is famous for being the first hysteric treated by Josef Breuer in Vienna between 1880 and 1882. The collection is divided into several sections which progress through Anna’s childhood, her treatment with Dr. Breuer, and the ultimate reclamation of her personal power after her release.

The first section of Somatic, “Laments/Praise: Elegies,” provides a snapshot of Anna’s relationship to her mother. The writing is lean, and the lines short, revealing images of a child raised with secrecy and an insecure attachment to her mother. In the opening poem, “Opaque,” Keniston describes her mother: “(her) absence/was a thing, immaterial/because gone” (Keniston 9). The author makes frequent use of photographic references such as the camera obscura, and images made from light to reinforce the ephemeral quality of the mother/child bond between Anna and her mother. The poems effectively convey the complex emotional tension between Anna’s childhood longing for secure attachment and the reality of her mother’s inability to provide that attachment. The poem “Antidote” begins with the lines “Let lack/be everything/inside there’s nothing/but transparency (Keniston 13). In “Redundant” she writes, “the cost is holding secrets in” (Keniston 24).

The poems in Somatic are sprinkled with quotes from doctors and psychiatric professionals, which add gravitas to the writing. The second section, entitled “Displacement: Odes,” begins with a quote from Mady Schutzman: “the hysteric’s body is a site for displacement; hysteria, like photography, produces a snippet of “truth” in the form of a symptom” (Keniston 27). In this section, we learn the details of Anna’s symptoms and the new treatment designed to help her and other hysterics. There are repeated references to veiled procedures that suggest sexual manipulation and/or abuse, mysterious procedures that read like experiments in 19th century mesmerism. These poems suggest that the induction of hysterical states was used as a prerequisite to curing the patient of hysteria. In “Prophylactic,” a poem about Munchausen Syndrome by Proxy, Keniston writes “a prophylactic injury/preventing something worse/or a cure/ahead of time” (Keniston 36).

The third section, “Symptomatic: Anna’s Arias,” deepens our understanding of the harm done to Anna and other patients at the hands of the doctors, and underscores the disempowerment of the patient confined to the institutional setting. The final section, “Assemblage: Odes,” is comprised of poems of greater clarity and self-understanding on Anna’s part compared to the previous sections. There is a feeling of release and relief, a sense of survival at having escaped the hospital and the heavy-handed treatment by the doctors.

The quality of writing in Somatic is consistently high, and presents a full palette of moods, from alarmed and desperate to tender and empathic. There are glimpses of dark irony that reveal a patient who, even in the throes of her treatment/ordeal, was able to cling to a semblance of healthy selfhood. I recommend this title to poetry readers who are interested in psychoanalysis and general psychology as well as those who enjoy poems of depth and transcendence constructed by the hand of a fine writer.

Video of Ann Keniston reading from Somatic is here: https://youtu.be/XAtidJ8TOrY

Sandra Anfang is a poet, editor, and poetry teacher. Her published poems appear in numerous print and online journals. She is the author of two chapbooks from Finishing Line Press (2016 and 2018) and Xylem Highway, a full-length collection from Main Street Rag (2019).