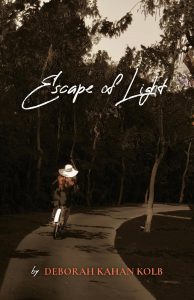 Escape of Light is Deborah Kahan Kolb’s second chapbook of poetry. She is the recipient of several awards, for both her poetry and her essays. Her work has appeared in numerous print and online publications. Her artistic voice arises from her upbringing within the insular world of Hassidic Judaism, and a well-developed (and keen) sensibility for the human condition. Much of the work in Escape of Light focuses on aspects of womanhood, relationship, growth and emergence. Her wit and artistry are intertwined in sometimes complex, sometimes heartbreakingly innocent, poems that explore as they expose some of the most raw and intimate of human experiences.

One of the subtleties of this collection is the quiet pairing/contrasting of opposites, such as the twin concepts of emergence and erasure, within a given work; or between adjacent ones in the collection. For example, in the opening poem “Emerging, Art of,” the lines:

It seems I’ve been emerging
for a number of years now …
… the steady
march of metamorphosis …
Self-immolation, it seems, is a requirement
of emerging. (1)

The idea that one needs to dissolve to evolve – rather like a butterfly emerging from a chrysalis – recurs throughout the collection. Or how something is created from nothing:

from silence.
The steady escape of light

from the black hole of space…

Like you, we were only a figment last season.
And now we live. (“The Gestures of Trees,” 2)

In other ways, too, this pairing of what is with what might be shows up in “My Son’s Gay Twin” and “Re(vision).” In the former, “I met today my son’s gay twin, a man/whom I never pushed screaming from my body” (6).  And in the latter, “Make [this number[ disappear… This number does not define me… I am ready to begin my life” (11). So, too the wonderful bookends, in “The Women Are the Story;” “mound at birth, heap at death” (25).

She is fearless in experimenting with form, something that pulled me, as a lover of language, right along on several new paths. In “you the shining thing,” her layered use of language cascades over itself like a waterfall of sound and meaning – from internal rhymes to the more overt use of the same rhyme/word to end/begin a stanza. This particular use of word leading from one to the other stanza is a form I find especially compelling, as it leads the reader forward with a subtle urgency. Paired with the ongoing use of a long ‘I’ sound through its lilting rhythm, the piece has an almost meditative or psalm-like quality.

And then, there is the twist, as I call a poem that ends with something so much greater than its beginning. In “What Lies Within,” “the/smallest/girl masquerading/as   the   largest/woman” (9).  What a grand concept; and for those of us women who have known the many belittling ways society has of cutting us down to size, how powerful!!

Some of the poems address both current and past political realities, some tongue-in-cheek while others are quite pointed/poignant. Another few deal with the highly personal relationships with men and food. Some bring the reader to their knees, like “Psalm for a Son’s Burial;” while one is outright bawdy (“Jessica Rabbit Plays the Piano”)! Overall, what Deborah Kahan Kolb has done in Escape of Light is to weave a collection that lights up deeply personal experience and creates resonance in the reader. Not because of shared experience, necessarily; but because of the poet’s ability to build from strongly universal emotional underpinnings to tell her own set of unique stories. From them, we can find the structure to understand our own.