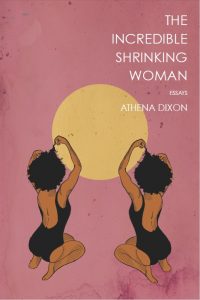 The Incredible Shrinking Woman opens with an essay, “A Goddess Makes Platanos,” that takes places in the center of chaos and redemption. In the mind of the woman who experienced it, the disjointing of time is jarring, but in the mind of an editor it sets the stage for all that comes afterwards. It gives readers a view of what they can expect from the narrator, both insecurity and untapped power. Giving up expectations of what the sequence should be allows the book to manifest in its natural form.

In some ways, I’ve sat with the manuscript of The Incredible Shrinking Woman for at least eight years. I saw the process of compiling the collection as a letting ago or a giving up. I’d survived a devastating breakup and divorce, saw my hopes of motherhood dashed both biologically and via adoption, and I’d moved to a major American city to lick my wounds. When the first of these essays was written, in 2012, I was a thirty-four-year-old divorcee struggling to stay alive. Having babies went on the back burner while I worked my way through therapy and brought myself back from the brink. The life I expected, the life I thought I deserved, was certainly not the life I received. These experiences had been tightly held to my chest for far too long and in order to find the best way to take what I needed and give up that which did not serve me, I had to lay them bare.

When I settled into the decision of writing a memoir via essays, I was prepared to place the stories to the page and let them free. For most of these essays the content is something being written, and shared, for the first time. There is an at times overwhelming fear in this exposure. Not fear of scandal nor of shock. The fear is simply being seen outside of the neat boxes I so desperately try to fill. Since 2015, the first year I truly told myself I was writing a collection of essays, I’ve wound my way through titles and content in more ways than I can count. The words and stories I wanted to present to the world anchored into me just as much as the actual experiences at their cores. They became an even deeper part of me than I ever expected. What I found was there was no giving up these stories for good. More than anything, I was locking them in. I was making the ghosts in my head solid instead of banishing them.

What I did not expect was to feel my grip tighten on the pieces and the sequencing that made sense in my head. No matter how many titles under which the essays found shelter, only one timeline persisted; a timeline in which I could move around the pieces of the story in a way that was beneficial to what I wanted to remember. I took care in what time told me the story should be and not where the retelling led me. After so many years, it was nearly impossible for me to step outside of the manuscript and see the through line. It took a good editor to step in and help me see the light.

In some ways, my desire to control the sequence was a way of controlling how readers could, or would, react to me. If I could control the way the story unfurled then I could hopefully sway them into the memories I held so dear and the life I never fully got to lead. This does us all a disservice. For whatever my comfort may have been in the ordering of the essays, comfort does not always a good or truthful story make. The partnership with my editor helped me find the place where each part of the story fit no matter how much the ghosts of memory tells me how things actually “should” have been.

A native of Northeast Ohio, Athena Dixon is a poet, essayist, and editor. She is Founder of Linden Avenue Literary Journal. Athena’s work has appeared in various publications including GAY Magazine and Narratively. She is a Pushcart Prize and Best of the Net nominee. A Callaloo fellow, a V.O.N.A. fellow, and a Tin House Workshop attendee, Athena is the author of No God In This Room, a poetry chapbook (Argus House Press). Her work also appears in The BreakBeat Poets Vol. 2: Black Girl Magic (Haymarket Books). Athena is the co-host of the New Books in Poetry Podcast via the New Books Network. She resides in Philadelphia. Learn more about the author at www.athenadixon.com.