Juanetta passed the abandoned house every year since third grade and paid it no mind. She didn’t pass close because now she was in high school, she walked in the street. But one afternoon, when the street was freshly tarred, she was hurrying beside the hedge along the property and without warning pitched forward and vomited.

She ducked into the yard to think. Her sister had a baby at fourteen and looked like she was following in those footsteps. Mama never said, “None y’all girls worth a damn,” but inside her head Juanetta heard those words in her mother’s voice.

As she cried on the stoop of the house, hidden from passersby, she noticed a flurry of activity inside the hedge. She had the feeling of being watched. Sure enough, at the end of the yard, a sparrow tilted its head from the branch of a mulberry tree. Slipping sunflower seeds from her book bag, she scattered them across the hard-packed earth and waited for the sparrow to come down. It hopped, closer . . . closer. Just as she might touch it, it gave a loud cry and a flock rose from the hedge. Snapping like a sheet, it dropped so quickly she lost sight of her sparrow among the dozens. But when the last husk was turned over, the bold sparrow rose first. With a full throat, it led the flock back to the hedge.

When she checked, there wasn’t a sparrow to be found, but along the hedge, fresh hoed earth sprinkled with green shoots. Like beans, she thought. Germinating in a dixie cup on the windowsill at school. Alive. In the time it took to retrieve her bag, the shoots had sprung into a row of collard greens, and in a blink of an eye, they were silver with frost. Perfect. “I can practically smell them cooking down with a turkey wing,” thought Juanetta, her mouth watering. But when she tried to pick them, her chest tightened with fear. What had the science teacher said about eating vegetables grown in the city soil? There were bad chemicals in the air and water, lead from the cars. Poison.

She stared at the greens, hungry, unsure what to do, when a long clear cry came from the mulberry tree. Gathering up the greens, she hurried away.

There was nobody home. She cleaned the sink, then rinsed and inspected each leaf like she’d been doing it her whole life. She jumped when the pot buckled with heat, and tossed in garlic and onion before the oil burned. Then leaves.

Mama was overcome. “Lord, if I don’t smell greens! And how they fresh too?” But then she stirred the pot and frowned. “Why you didn’t use the turkey wings?”

Juanetta had no answer for why she changed her mind or how she’d known about the iron skillet. Mama’s lip curled. “That old spider gonna leave a rusty taste.”

But Juanetta turned the cornbread out on the counter, and it tasted fine. She explained how she wiped the skillet clean with oil and kept it in a hot oven.

Mama fixed herself some of everything. “Who you ever seen do that?”

Again Juanetta had no answer, and Mama didn’t speak more, though she hummed a good deal. Juanetta decided to put off telling her about the other business.

The next afternoon she didn’t hear a peep from the hedge. When she checked the other side, the soil was ash-colored and stingy as the rest of the yard. Nothing growing but food wrappers. She rubbed her belly, then sat eating sunflower seeds. Soon she felt eyes watching and there it was. The bold sparrow in the tree. It summoned the flock to Juanetta’s scattered seeds, then led them back.

When she checked, there were no birds but once more green shoots growing in dark, loose soil. She blinked and a row of tomato plants appeared, the plum-shaped fruit glistening like someone had only just watered. She weighed one in her hand like a little heart, wondering if it was safe when the sparrow cried out from the mulberry tree as it had the day before. She picked the whole crop and hurried home.

Mama leaned over the sauce, the edges of her hair crinkling from steam. “Did you add sugar?” Juanetta shook her head. “Wouldn’t a fatty pork chop be nice?” But nothing was needed, not even hot sauce. Hungry Mama, thought Juanetta, as her mother mopped the pot with the last piece of cornbread.

All winter, Juanetta fed the sparrow and its flock and found something growing. Even after the snow came, she harvested cucumber, pole beans, corn, celery, and things she didn’t have a name for, like romanescu and rutabega. And every day, when she got home, she prepared supper. As the days multiplied into weeks, there was more food than two bellies could hold. She read cookbooks from the library and by Christmas stocked the freezer and put up preserves.

Mama didn’t say so, but Juanetta saw she was glad she didn’t work all day to come home and have to cook. Glad Mama. Hungry Mama. Meal after meal, she licked her fingers, sucked her teeth, never mentioning Juanetta’s belly. Juanetta thought her secret was safe because now they were both fat.

But we ain’t elephants. One spring day, eight months from her first hankering for greens, Juanetta stepped out of the yard with potatoes and a baby.

“Fingerlings,” she told Mama. They looked like their name. Chubby child fingers roasted deep brown in the skillet. Skin peeling like wax.

“You all right?” Mama said. “Sound like your stomach trying to tell me something.”

“Well,” says Juanetta, looking for a way to bring up the baby. “You know how I always be bringing home food.”

There was a flutter under the jacket.

“You got something else?” says Mama, washing everything down with a glass of cold water. Juanetta wasn’t sure whose heart was pounding against her chest. Nothing left to eat, it was now or never. She pulled the tiny thing from her jacket, and Mama leaned forward, smacking her lips.

“You got that today?”

“Yes, Mama. I went to dig up potatoes and there it was.”

Mama knew Juanetta was lying and decided to teach her a lesson. “Well, what you waiting for?”

Juanetta stood up, scared. “What you mean?”

Juanetta took a step back.

Juanetta clasped the little sparrow to her chest and told the truth. 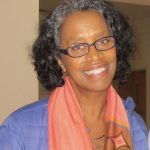 Mary McLaughlin Slechta is author of a poetry collection, Wreckage on a Watery Moon (FootHills), several chapbooks, and a novel, The Spoonmaker’s Diamond (Night Owls Press). Her short fiction and poetry appear in many journals and anthologies, and she received a first-time publication award from The Caribbean Writer. A Kimbilio Fellow and editor for great weather for Media, she lives with her family in upstate New York.