What the River Knows

People tell me I am good with babies. Children like me, they say, this little so-and-so doesn’t smile for just anybody, that little such-and-such who never talks to strangers must be pried off my leg in tears. My neighbor holds her rounding belly and says I should have one or two of my own. My sister writes me a letter to say she dreamed she gave birth to seven children. Knowing her, she wrote this unflinchingly. My friend calls to say she dreamed I would have three children, and when she dreams of me again, I will be pregnant. She says her dreams have never been wrong, and I believe her. But every night I dream of birthing a river, in which all my children drown.

Once I dreamed the Jade Emperor held a race to honor the earth, and the prize was time itself. He drew the finish line in the dirt, and it became a great river. The cat, knowing herself, asked the rat to wake her on the day of the race. The rat promised to do so. But on the morning of the race, he woke and rushed to the appointed starting line. Did he forget, or did he choose?

I am not afraid of blood. I am not afraid of labor pains or aneurisms, though maybe I should be. My boss laughs. She shoves a coffee pod into the fancy office espresso machine and tells me that everything tears, honey. Everything.

It was a long race. At the end, the rat could not cross the river alone, so he was carried on the broad, bony back of the ox. Just as they reached the riverbank, the rat jumped ashore and won the race. Did he ask the ox for safe passage, or did he stow away? When the cat woke, the race was over, and twelve animals had already been appointed guardians of the hours and months and years. After that, the cat learned to only nap and never sleep deeply again.

My neighbor asks if I want to hold their newborn, already lifting his tiny red body toward me, demonstrating with her own uncertain new-mother hands how to cradle his head. Every little bump and jar of him makes my blood pressure spike. I look down at the blue veins in the translucent skin of his closed eyelids, and no maternal instinct sparks. This river inside me knows I am only good with children in the way a cat is good to the houseguest who most hates cats. 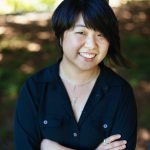 Marci Calabretta Cancio-Bello is the author of Hour of the Ox, which won the AWP Donald Hall Prize for Poetry. She has received fellowships from Kundiman, the Knight Foundation, and the American Literary Translators Association, and her work has appeared in the New York Times, Best New Poets, Best Small Fictions, and more. She serves as poetry editor for Hyphen magazine and as a program coordinator for Miami Book Fair. www.marcicalabretta.com