My Mother in Corners

I believed my mother was water, my father fire. Swarthy, salty-sweat, flash-fires she soothed and tempered. She scrubbed the hardened soap from the corners of sinks and counters, the pee from the grout around the toilet. He missed. His mother didn’t teach him properly. Mom complained when he wasn’t around, but not much when he was with us.

When we camp, my mother keeps the fire. My father is the one who builds, but she stokes. She is the first one up and the last one to bed. We camp in the piney woods near a lake. We don’t swim, but we fish. I get the cane pole because I am the girl. So I say I don’t want to fish. Instead, I read under trees or find brooks to follow. While they cast, I have my mother to myself. We bring plenty of books and magazines. We read the stories from Redbook, our favorite. It’s never too hot out here under the tall pines.

My brother and I are allowed to gather the tinder. Every good campfire starts with good tinder. Dry leaves, bark, twigs, newspaper, the ripped-out pages of my blue-lined journal filled with embarrassing poems she said were “good for my age,” fluffy fungi. It all catches easily and burns fast. My mother shows me how to make a char cloth out of shredded underwear and an empty Altoid tin. “We are the char-women,” I say.

“Will the world end in fire or ice?” she’ll ask. The guys don’t get it. They don’t read like we do.

My father’s anger comes in many forms: white-hot poker, pitch-black the color of that pure cobalt gas when I light the stove with a kitchen match. Sometimes, she says, I do it on purpose. Make him angry. I’m not sure if she’s right or not. It is an old argument between us.

“Grandma told me I wouldn’t understand how she loved me until I had a daughter of my own,” she says. I am slightly annoyed.  It is well and good for her to say so. But I am always the girl.

“Men will love you more than anyone. But you always love your children more,” she says.

“I’m not entirely sure that’s an absolute, Mom.”

I liked waking in the mornings there at Red Hills Lake. She will put eggshells in the bottom of the coffee mugs to settle the grounds. Even the air is different, clear like the sky through branches. Out here the sky is higher, the earth smaller. My brother keeps slumbering, my father snores in the big tent. It is just me and her, quiet together inside the sounds of the forest. I try, but I can never wake earlier than she does.

I am glad to be away from the outskirts of Houston, a place I used to call the armpit of the world. I was twelve, still a girl but also questioning. Also scowling.

She knew how to pitch a tent into the soft soil. We were happier when we camped; my father still raged, but not as often, not the same way.

She was thrifty. When I left home for college, she bleached her dead mother’s underwear and packed it for me. I didn’t find this strange, not then. She destroyed the rats in our attic with bromethalin, a poison that would be dangerous for our dogs but was the most practical for a population needing a quick knock-down. That was how she solved things, without outsiders. When my first college roommate saw the sturdy cotton underwear, I missed her, nursed the shallows of my sorrow. When she wrote and said I wasn’t to come back, I told myself they were all a habit I needed to break.

I thought she was water, I thought he was fire. She was sweet and low. Only shrill in moments, when it was too much for her.

I thought she was there to douse my father’s fire when it blazed too high. What was she talking about, a mother loves her children more? She was bound to him, no matter what. No one would bind to me that way, not even her.

She had a garden when she was old. Snap bush beans, lima beans, turnip, tomato, southern peas, summer squash, a variety of peppers. Things had calmed down a bit. She was stronger out there in the country for a few years, and then she was frail, and then she died. I hoped for a full reconciliation. But how, when there is so much we can’t say?

She gave me a cookbook bound with recipes from the Master Gardeners. I kept it on my shelf. It’s still there.

“That’s not true. We camped. We went all the way out to Big Bend almost, didn’t we? And that’s the only time I can ever remember being able to see the constellations. I remember that.”

My mother, my fire. She is the slow burn. 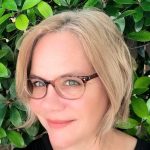 Claudia Smith is the author of the collections Put Your Head in My Lap (Future Tense Books), The Sky Is a Well and Other Shorts (Rose Metal Press), and Quarry Light (Magic Helicopter Press). Her flash fiction and essays have appeared in several anthologies and journals, including Norton’s New Sudden Fiction: Short-Short Stories from America and Beyond and New Micro: Exceptionally Short Fiction. Find more about her writing at www.claudiasmithwriter.com