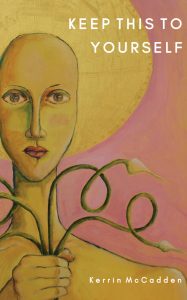 By the time Kerrin McCadden’s brother dies of an overdose, she has already rehearsed his death: “There he goes again,” she writes in Keep This to Yourself, a searing collection that examines both the profound individual grief of losing a loved one and the collective tragedy of the opioid epidemic.

These sixteen poems rely on the juxtapositions of the “monster” that is addiction and the complexity that is the love between siblings. In the opening poem, “When My Brother Dies”, McCadden writes:

In the john boat, my brother and I float and row.
+++Water weeds skim the boat. We eat quartered
++++++oranges and lean our backs against the gunwales
+++++++++and rip worms onto tiny hooks. We forget
what is coming and act like there aren’t
+++any more deaths to come. We are lazy.
++++++The water moccasin coiled under the seat
+++++++++keeps its mouth shut as we climb out.(2)

Throughout these pages, the poet juxtaposes the idyllic and the dangerous, the viscerally sublime and the lurking terror, the odd and the ordinary. An addict, McCadden reminds us, is someone’s beloved, the center of memories both profound and mundane. However, while his disease rages, his family must reconcile both his present self and his former, their own lives, and their lives as loved ones of someone “who keeps dying/on couches and in vans, knows how to do /this one thing, this laying back of the head,/this wooden blanket from the waist down,/this wooden blanket top door closing” (3).

In “Mass General”,  the poet sits with her brother’s body and says: “I am/no longer a sister,” but of course she will always be. She holds his hand, tattles on him when they are children, rescues his dog when he is no longer able to care for it. Finally, she slips him a “lollipop with a violet inside it” because “a sister is supposed to put something in the coffin” (1).

McCadden also examines what it means for her parents who adopted her brother as an infant. “I wanted you/I always wanted you,” (12) their mother tells him. On a family vacation, the mother collects rocks, the father paces and “remembers/the Revolution its many dawns and holidays” (7) while McCadden treads water near the brother who doesn’t swim. The oddly enjambed lines here and throughout the collection reveal a family tied together but adrift, their failed attempts at coming together, at doing what other families do.

Most powerfully, the book is anchored by a series of six ten line poems titled “reverse overdose” interspersed throughout its pages. Starting with “my brother’s heart is transplanted into a stranger/machines keep my brother’s organs alive for days,” (6) the poet moves back through time. He is high and comes clean over and over, he misses his sister’s wedding, he goes to jail, “he breaks his neck but doesn’t know for days, his dirt bike flies/over a cliff he delivers the early newspapers with our dad,” (14) he tells his sister “he came from a dinosaur egg” (17). The poems thread moments of hope with moments of despair and return her brother to the days he was recognizable to all of us as a little boy who did what so many of us did: deliver newspapers, don costumes, read books. Much like a Shakespearean tragedy, this series reminds us of the what if’s, of the if only’s, of the impossibilities of starting over in hopes of a happy ending.

More than 70, 000 people died last year from the opioid epidemic. In her final poem, McCadden writes: “No one will let me have my sadness or tally/what I’ve lost” (25). But her collection achieves what the best poems do. In deeply intimate ways, it connects one family to thousands, one sister to all those whose lives have been devastated by this disease.

Carla Panciera has published two collections of poetry: One of the Cimalores (Cider Press) and No Day, No Dusk, No Love (Bordighera). Her collection of short stories, Bewildered, received AWP’s 2013 Grace Paley Short Fiction Award. Her work has appeared in several journals including Poetry, The New England Review and Nimrod.