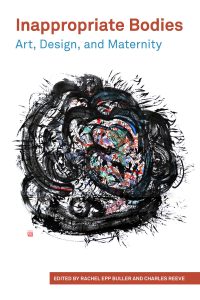 In the era of COVID-19, parents find themselves confronting new ways of inhabiting the role of a parent-and. Parent and teacher. Parent and work-from-home employee. Parent and front-line worker. Parent with coronavirus, cut off from those she loves. More than ever, we writers ask, as does Niku Kashef in chapter 8 of Inappropriate Bodies: Art, Design, Maternity, “How does a person who is never off the clock balance art and life?” (155). Though written in pre-pandemic times, Rachel Epp Buller’s and Charles Reeve’s co-edited anthology often rings true as it explores what it means to be a parent–usually a mother–and artist. This collection of 18 chapters, introduction, and afterword is sub-divided into three sections: “Body Politics,” “Family Practices,” and “By Design.” The chapters, most of which include black-and-white photos and illustrations, range from critical essays to interviews to manifestos to letters. The work is transnational in scope and incorporates books, photography, sculpture, sound art, performance pieces, film, installations, architecture, and design.

Inappropriate Bodies covers just about every facet of motherhood, from pregnancy to reproductive technology to old age, including raising a child with disabilities and deciding not to have a child at all, although adoption, fostering, and other ways of becoming a mother are not really mentioned. Perhaps the editors make a distinction between “motherhood” and “maternity,” in which these other ways of becoming a mother do not fit. It is true that much of the work is devoted to pregnancy and birth, yet at the same time, many of the issues raised–the feeling one must keep one’s children separate from one’s art, the lack of suitable studio and exhibition space, the second-class status of female artists, to name a few–surely apply to all mothers. As Natalie Loveless says in “Maternal Bodies and Collective Action” (chapter 18), “Although the art world is not the only vocational profession that remains, despite the gains of the past forty-odd years of feminist activism, unwelcoming to visible mothers, these issues take a particular form in the art world” (348). How does one find time and a suitable creative space while pregnant, then with infants and toddlers? Should motherhood affect artistic processes and works? If so, how? How can exhibition spaces be made more inclusive for artists and audiences alike?

Many of the answers evoke, explicitly or implicitly, subversion. Irene Pérez, for example re-appropriates the traditionally feminine art of embroidery to create pieces such as Ugly is an Ugly Word (65), while Jennie Klein describes Miriam Schaer’s often unsettling work featuring realistic baby dolls (chapter 3). Inappropriate Bodies reveals artists who seek to liberate, even upend the art world. Many no longer want to pretend that they don’t have children. Others talk about finding inspiration in motherhood itself, all while worrying about possible relegation to mother-only artistic ghettos. Some pieces are angry, others haunting, a few almost hilarious; all are unapologetic. Calls for interdependence and collaboration resonate throughout, as seen in chapters about Mothernism (chapter 1), “the Motherbody model” (chapter 5), and The Let Down Reflex (chapter 16). While some of these appeals may seem utopian–Amber Berson and Juliana Driever admit as much (326-27)–in some cases they have brought about real, perhaps lasting change (the conversation in the closing chapter shows this is debatable).

Inappropriate Bodies is a work of art criticism with an overall scholarly focus, written in an engaging manner. Because it covers a vast selection of art forms and artists, readers will likely appreciate some sections more than others. For example, Shira Richter’s “The Motherbody Model: An Invitation for a Care-Based Work Ethic,” resonated with me deeply, as did “The Body in Letters: Once Again, Through Time and Space” by Rachel Epp Buller, Lena Simic, and Emily Underwood-Lee. Other chapters gave me more troubling food for thought, particularly when it comes to making one’s own children the subject of one’s art. I discovered in myself a self-imposed line that limits what I will create for public consumption; some of these artists crossed that line. Such lines, however, are purely subjective; others may find theirs elsewhere, and for some, it may not exist at all. The line is not the question. What matters is that we heed the call for a world in which, on their own terms, mothers can create.

Laura Dennis is a college professor in Appalachia. She manages and writes for the Attachment & Trauma Network (ATN) blog. In addition to being recognized in two literary contests, she recently had an essay published in MER VOX Quarterly (April 2020) and another as Editor’s Choice in the most recent issue of Kentucky Philological Review. She was also the featured author in the Spring 2020 issue of the Bethlehem Writers Roundtable.