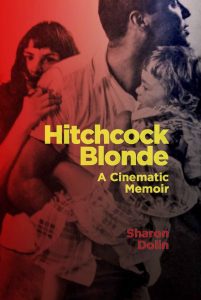 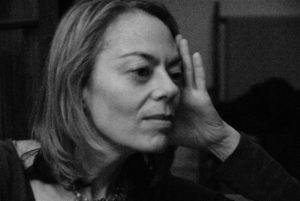 Reading Sharon Dolin’s memoir, Hitchcock Blonde, is like sitting in a theater next to the author as she watches a movie reel of her own life, and uses Alfred Hitchcock films to make sense of her memories. The author herself tells us she finds it easier to remember things by not thinking about them directly, and therefore the Hitchcock movies help her process the scenes that span her life including the complicated relationships, thoughts, and feelings carried within the episodes that she shares.

Each chapter is anchored with a Hitchcock movie and a synopsis of the plot while the author dissects the characters and even Hitchcock himself. Flowing between past and present, Dolin uses her insights into the film to tell us stories of her own life. This technique produces a memoir that is episodic and thematic versus a more traditional narrative, with themes of abandonment, fear, self-doubt, mental illness, desire, sexuality, regret and the heartache of wanting to save someone unable to be saved.

In part one, most of the five movies referenced involve a child in some sort of peril—taken hostage at gunpoint or kidnapped for ransom—which resonates with Sharon because she was often a child in peril, and recognized the familiar look of fear and anguish in their eyes. Sharon grew up with parents who struggled to afford much more than a bottom-floor rental in Brooklyn, New York. Her mother suffered through life as a paranoid schizophrenic, a sleepwalking burden to her husband and daughters. Sharon’s father, a mysterious and charismatic traveling salesman, protected her and her older sister but did not provide the sanctuary that all of us crave in a childhood home.

In part two, we move into adulthood where Sharon tries to make sense of her sexuality and her place in this world as a woman through five more films. She draws parallels between herself and the female characters that Hitchcock used to make his sadistic judgments about women and their carnal desires.

The author has struggled with Body Dysmorphic Disorder and doesn’t consider herself attractive to anyone, much less the opposite sex, and seems genuinely surprised when a man desires her. Not yet realizing that it is the desire itself that lures her to the men in her life, she is a sure bet for anyone interested in her regardless of the issues they bring to the relationship, such as bigamy and betrayal, addiction and tragic death, control and infidelity. Sharon’s intuition into the relationship with her controlling and ultimately unfaithful husband will resonate with anyone who has been in a relationship like this before— “Though there are probably more women whose voices might throw back an echo if I called out to them, I know I have to pull myself away. That I have heard enough to know I do not need to know more.”

It is obvious to the reader that Sharon Dolin, an award-winning poet, is a master of language and highly eloquent, but it was a few of her simplest lines that held the most power for me. In The Lady Vanishes, the author discovers similarities to the challenges of a mentally ill mother who was either away in a mental institution, having an episode where she was unstable and unpredictable, or drugged to the point of nothingness, all leaving a void that shaped her daughter’s life. At the end of this chapter, the author summarizes her relationship with her mother in one profound sentence that made my heart lurch—“She is my lady who vanished.”

For all the insight and revelations within this work, the author is also gentle with her memories and leaves room for the fact that her vision is cloudy. One of the major themes of this memoir is the conundrum of memory and truth and finding the balance of both in order to understand our past and make sense of our present. In Sharon’s own words, “Every one of us with a memory lives in briny water,” referencing the murky mixing of the past and present.

The most magical experiences are ones that stay with you long after the movie ends, or the curtain drops, or when you put the book down. Perhaps you are troubled or haunted by something and you’re not quite sure what it is, but you find yourself still thinking about what you saw or heard or what the characters may be doing next and where the story may lead. Hitchcock had that effect on his viewers. I’ve seen three Hitchcock movies in my life, and although I don’t consider myself a fan or a buff, the ones that I’ve seen have stayed with me. The Birds terrorized me as a child and produced a life-long suspicion of any winged creature.

A master class on Alfred Hitchcock, this memoir studies his motives, character choices and the filmmaking techniques that he used to produce the distinct viewer experience and psychological suspense he was known for. Sharon Dolin leveraged her discerning fascination with Hitchcock movies to produce a distinct reader experience that has remained with me. Once in the rhythm of this technique, I found Hitchcock Blonde enjoyable and haunting at the same time. It is a cinematic memoir, indeed.

Kelly Bargabos is the author of Chasing the Merry-Go-Round: Holding on to Hope & Home When the World Moves Too Fast, a 2018 Nautilus Book Award Silver winner and a finalist in the National Indie Excellence Awards. Her nonfiction has won Third prize and Honorable Mention in the Soul-Making Keats Literary Competitions and has also been published in literary journals such as The Sun, Mom Egg Review, The Mountain, an Anthology by Outrider Press, Inc. as well as articles featured in The Post-Standard. Kelly writes as a witness to the spectrum of human experience in order to connect, share, shift paradigms, inspire and ultimately expand our universe through words.