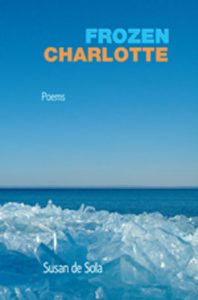 The sea’s soft fingers of anemone know
to open in the dark.
…
The sea lifts, pounds the glass. Insists on randomness.

De Sola’s poems transcend place and time. From Mt. Etna to Holland to a Jewish cemetery in Marrakesh; to Little Odessa and Bryn Mawr, we are transported. De Sola is a boundary spanner – she spans countries and continents and her identities give her entry and access to worlds upon worlds. She is many things – a sculptor, a James Joyce scholar, a translator, a photographer, a descendent of a great Rabbi, and a mother of five.

Her poems of motherhood are evocative, tender and, at times, haunting. She lifts the curtain and lets us into her home to see her tiny daughter, Eve, awakening her. She shares her son’s belongings in “Shrine for 16”, revealing all of the flotsam and jetsam of growing up male, from condoms and shot glasses to mini bottles of alcohol.

De Sola is a poet of still life, evoking the life and history of the objects in her home, from tulips to sea glass. All of us now know this experience, as mothers, as dwellers in pandemic, of creating the meta from the micro. Many of the poems are quotidian; consider for example these lines from “The Tulips”:

…Diving petals
reveal a pattern on the inner corner,
a three-point wedge of aubergine black, capped
by arching yellow bands – a stylized print
of itself in little – vector to the ribbed red
flank, which had barely aged. The tiny tulip-
print anticipates its slide to symbol.
The sleekly flattened violet pistils spill
out scarcely any powder….

She is at her most tender in her poems of motherhood. In the poem “Daniel” she renders the unbearable pain of giving birth to a baby who dies hours after birth, and the moments of holding baby Daniel, whose fingers “would not curl”.

“I would have made a good mother, she said.
…
“The hardest part was giving him back,
but the nurse was kind. “

There is much to appreciate in de Sola’s work, including the use of form, such as the ghazal. Her use of rhyme is both lilting and off kilter, jarring and arresting.

You may wonder – as I did – what is a Frozen Charlotte? A Frozen Charlotte is a type of doll made of porcelain, popular in the Victorian era, with no joints. The doll is naked, as are these poems.

Deborah Leipziger is an author, poet, lecturer, and mother of three daughters, her muses. Her chapbook, Flower Map, was published by Finishing Line Press (2013). Her poem “Written on Skin” was nominated for a Pushcart Prize. Born in Brazil, Ms. Leipziger is the author of several books on human rights and sustainability. She advises companies around the world on social and environmental issues. Her poems have been published in Salamander, Mom Egg Review, Voices Israel, POESY, Wilderness House Review, Ibbetson Street, Amethyst Review, and the Muddy River Poetry Review. She is the founding co-editor of Soul-Lit. To read about her poetry, go to: http://flowermap.net/