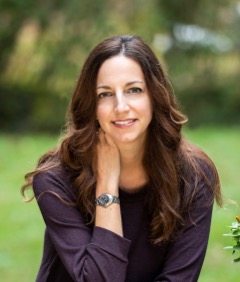 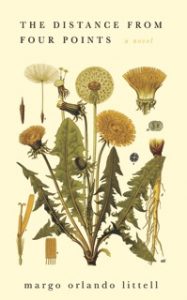 Margo Orlando Littell on The Distance from Four Points

When I started writing The Distance from Four Points in 2013, pandemics were something safely tucked away in the world of science fiction or dystopian fiction—not the gritty, realistic literary fiction I was working on. Yet here we are. My novel is coming out when the unimaginable has become our daily life. It hasn’t even seen a bookstore shelf and already feels like a relic.

In The Distance from Four Points, Robin Besher must leave her affluent suburb and return to her Appalachian hometown to manage a handful of rental properties her late husband blew their savings on, while doing everything she can to keep her teenage daughter from discovering the truth about her traumatic past. My characters meet in crowded Walmart aisles, attend landlord meetings, drive together in cars for spontaneous visits to other people, interview tenants in person. Robin dreads run-ins with old acquaintances at the local Sheetz. In other words, my characters live in a perpetual early March 2020, when life took place beyond the walls of the home. I gave my characters a happy-ish ending, but the novel is set in the present day, which means they have no idea what’s coming. The art gallery opening in the final scene of my novel might be the last public event the people of Four Points see for months, or years. The novel should conclude with a footnote: unbeknownst to these characters, all of their plans and assumptions are going to disappear.

What makes this book a relic—what makes any book published before the pandemic a relic—is the casual taking for granted of ordinary life. Who knew we had to be grateful for stocked shelves, for casual chats outside the school, for the swift and uncomplicated unloading of groceries from trunk to cupboard? Even if—when—the world reopens, much of what we miss might never come back. Ordinary moments written without a second’s hesitation will glow with naivete and even danger. In old movies and TV shows, people casually smoke in airplanes and hospitals. No one wears a bike helmet or a seat belt. Aspic is an acceptable and seemingly attractive culinary option. Those things aren’t done anymore. In fact, the reaction they garner is distaste, disapproval. They’re so far gone it’s hard to imagine they were real.

Will this happen to the events in my novel? Will the easy gatherings acquire an unshakable aura of risk? Will casual, nonessential errands to Walmart be forever tinged with irresponsibility? These are layers and implications I didn’t intend. My book will exist in a world at odds with the one in its pages.

The time for edits to The Distance from Four Points is long past, but even if I could edit heavily, it wouldn’t save the trapped-in-amber fate of my characters. In the past two months, the world in which my story takes place has disappeared. Making the story timely would require nothing less than a full-scale rewrite and reenvisioning. Still, the editing compulsion is hard to ignore. If I could take a pen to those pages again, I guess I’d simply make my characters notice more intensely. I’d have them pause to look around, take it in, appreciate the bodies around them, celebrate the crowded store, the interminable meetings with difficult people. And I’d have aggrieved, beleaguered Robin buy a few extra bags of her favorite cashews. She’s going to miss them when they’re gone.

Margo Orlando Littell is the author of the novels The Distance from Four Points and Each Vagabond by Name, both published by the University of New Orleans Press. Each Vagabond by Name won the University of New Orleans Publishing Lab Prize and an IPPY Awards Gold Medal, was longlisted for the 2017 Tournament of Books, and was named one of fifteen great Appalachian novels by Bustle. Originally from southwestern Pennsylvania, Margo now lives in New Jersey. She is on Twitter and Instagram @margolittell and her website is www.margoorlandolittell.com.