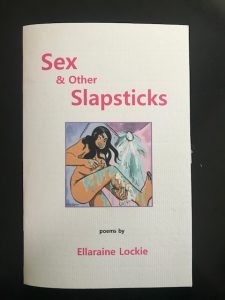 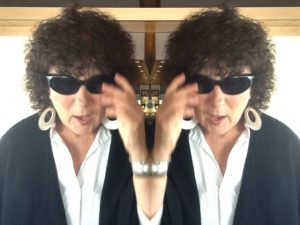 This chapbook of poetry by award-winning Ellaraine Lockie – her 14th – is immediately unusual in that every poem in the collection has won its own individual contest award. That fact might intimidate the reader from going any further. But rest assured, Lockie’s voice is accessible, earthy, humorous; she is no stranger to verbal wordsmithing from the heart and experience. All of which make these poems the more delightful for their directness and relevance to a range of women. Mothers, wives, lovers, daughters – all will find resonance in some if not all of the poems collected under this marvelously tongue-in-cheek title.

And surely the title sets the tone. We know Lockie is going to guide us to the lighter side of awkwardness and pain with a piercing directness that will not allow us to lower our gaze. Rather, it takes us to the very heart of each situation with ease. This collection offers a series of vignettes of memorable moments rather than a story arc or even progression of revelations. Rather, each poem contains its own universe of ignorance, revelation, desire or abandonment of norms, always with understated self-acceptance.

Any mother will be drawn directly into the book with ‘Role Reversal,’ the first poem, in which the mother suffers all the admonitions of an easily-embarrassed-by-the-predictablility-of-mother’s-actions daughter, leading the poet to turn the tables: “The list grows with each grade/I’ll never get through adolescence/without rebelling.” (p. 7)

In what might be called coming-of-age revelations, two poems stand out: ‘Nomenclature in Montana,’ in which the poet’s father’s plain-speaking pisshole is countered by the poet’s mother’s “more refined Number 1 Place … like they were addresses.” The poem continues with a hilarious riff on real estate as the poet has her first period: “I didn’t know anything about Number 1-1/2 Place/until its basement flooded red after I turned 14.” How she connects this discovery with her later experience as her “little piece of property/How its value increased exponentially when it served/as an annex through which two daughters passed.” And still more resonant to the older mother today: “How it’s slowly becoming a historic site.” (p. 17)

Similarly, ‘Treasures Today’ juxtaposes a nostalgia for the poet’s past with the practicality of the daughter’s present life experience, The poet opens her grandmother’s cherished jewelry box now sitting on her daughter’s bedside table, curious “to see what jewels my daughter/holds dear enough to honor in this heirloom…” Only to find “easily enough [condom]envelopes to equal/my grandmother’s thirteen children/and six miscarriages.” (p. 19) It’s Lockie’s ability to connect stories with understanding and humor that might enrage or concern another woman, that brings such freshness and clarity to hers.

But perhaps my favorite is her ‘Bidet in a Haibun,’ for both its format and content. Like many American tourists abroad, she wonders about the bidet in the bathroom. After three days of curiosity, she does “what any modern traveler would: Google on my laptop.” (p. 12) There she not only learns its function, but proceeds to try it out and, ultimately, order one for home. The juxtaposition of the underlying storyline with the three three-line interjections of the Haibun format, make a lovely counterpoint between the indoor discovery and the geography outside. This is Lockie at her most accomplished – a poet who knows how to use form or leave it behind; who makes of the most personal, the most universal; who is unafraid to reveal herself completely, entirely capable of enjoying the laugh at her own expense as a shared gift to her readers.

With poems ranging from the gently understated to the out-and-out ribauld, Lockie offers a collection sure to delight women of a certain age who will resonate with just about everything in the book, whether admitting to it or not. And perhaps men who pick up the collection will gain some perspective as well; siding with Lockie’s husband or just scratching their heads over the internal life of a wise and witty woman.