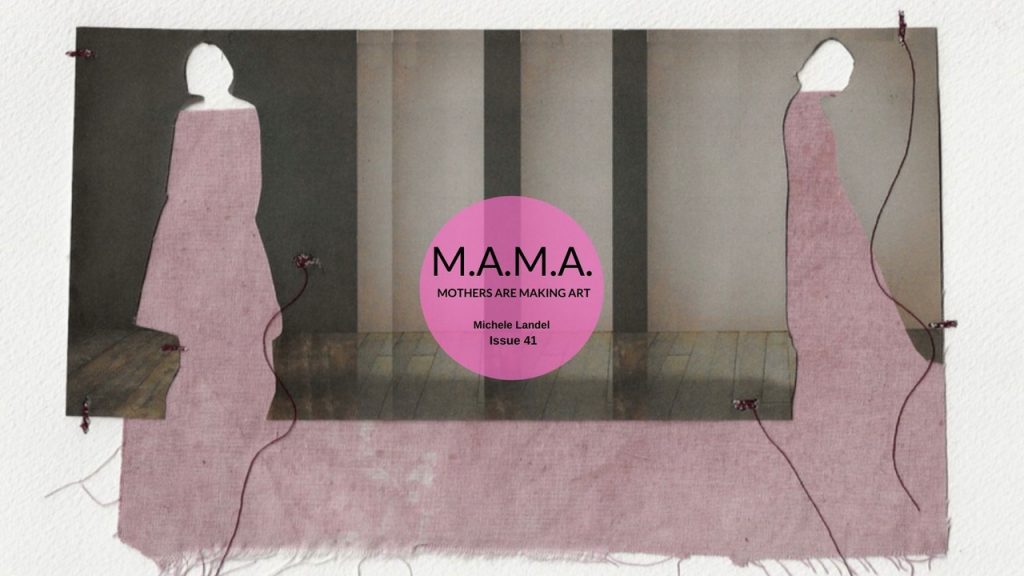 Close the door.
She looks at me like I am ridiculous.
But I only left it open for a minute.
A girl raised by a father has not
had to think much about the reasons
a family of girls keeps the door closed
and locked.
A family of girls knows
the unwanted will enter
closed doors, will penetrate locks
uninvited.
We do not need to leave
the door open for them.

Ann E. Wallace writes of life with illness, motherhood, and other everyday realities. Her poetry collection is Counting by Sevens, new from Main Street Rag, and her published work, featured in journals such as Wordgathering, The Literary Nest, Rogue Agent, Mothers Always Write, and Juniper, can be found on her website AnnWallacePhD.com. She lives in Jersey City, NJ and is on Twitter @annwlace409.

Michele Landel creates intensely textured and airy collages using burned, quilted, and embroidered photographs and paper to explore the themes of exposure, absence, and memory. She manually manipulates digital photographs to highlight the way images hide and filter the truth. She then sews layers of paper together to create bandages and veils and to transform images into fragile maps.

Who’s Afraid is intended to capture the tension between men’s anxiety of being unreasonably accused of inappropriate behavior and women’s fear of sexual harassment and assault. It is referencing the play “Who’s Afraid of Virginia Woolf?” and the inherent tension between actors and audience that is part of a theater performance and in this play the volatile and complicated relationship between men and women. To capture this, Michele started with the gaze. Specifically the ‘male gaze’ as defined by the feminist film theorist, Laura Mulvey. She began with a photograph of an anonymous woman from a clothing catalogue.  The photograph fits interestingly within Mulvey’s three phases of the ‘male gaze’: How men look at women, how women look at themselves, and how women look at other women. She enlarged the photograph, divided it into small rectangles, and then printed the image on secondhand bed sheets. She pieced the photograph back together and painted, using machine embroidery, the woman onto a second bed sheet – covering her skin, hair and clothes with thread. She cut out the woman’s eyes to make the viewer uncomfortable and scared. Deliberately  referencing childhood ghost costumes made by cutting out eyeholes from old bed sheets, she is engaging with the idea of spectator and specter both of which have the Latin root word ‘spect’ meaning to ‘see.’ From a distance the embroidered figure on the sheet appears three-dimensional. The embroidered figure appears to ‘see’ the viewer when in fact the gaze is empty. The vacant gaze causes anxiety and feels powerful.

For There She Was, comes from the last line of Virginia Woolf ‘s “Mrs Dalloway” and includes over a hundred embroidered, burned, dyed and collaged images. The series emerged from thinking about all the women who are currently speaking out about their pain and trauma and are refusing to go away. To summarize this moment, Michele brewed natural dyes in her kitchen using organic materials and then dyed small scraps of fabric (a cloth baby diaper, an antique tablecloth, a stained tea towel…) to represent the physicality of womanhood and gender roles. She matched the fabrics with small paper dolls that are digitally edited photographs from clothing catalogues to show the commodification and manipulation of women’s stories. To deliberately erase the women, she burned holes in the photographs and repeatedly stitched over their faces and bodies. Yet the women are still there. Their presence is even stronger.

Michele Landel is an American embroidery collage artist. She holds degrees in Fine Arts and Art History. Her work has been exhibited in Europe, the UK, and the US and she is extremely proud to have been in the 2017 Mother Art Prize group show. She was awarded the 2018 Innovative Technique Award by the Surface Design Association and is represented by the Jen Tough Gallery in Santa Fe, NM and the Muriel Guepin Gallery in NYC, NY. Her upcoming art events include Imagining Identity: Contemporary Textiles at the Palo Alto Art Center Foundation in Palo Alto, CA and the Hankyu Paris Art Fair in Osaka, Japan. Michele has lived in France for over 15 years. She has three school-age children and works out of her art studio in the Paris 9th arrondissement.www.michelelandel.com
Instagram @michelelandel
https://www.thejealouscurator.com/blog/2019/12/13/michele-landel/

M.A.M.A. is a sustained collaboration among The ProCreate Project, the Museum of Motherhood and Mom Egg Review, in which we pair and publish the work of artists and writers who are mothers. Scholarly discourse intersects with the artistic to explore the wonder and the challenges of motherhood. Using words and art to connect new pathways between the academic, the para-academic, the digital, and the real, as well as the everyday: wherever you live, work, and play, the Art of Motherhood is made manifest. #JoinMAMA