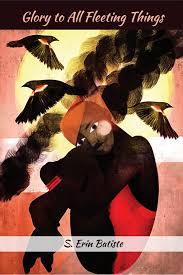 Glory to All Fleeting Things reads like a Baptist Church Revival testimony. A testimony in black church vernacular is the story a believer of Jesus tells or testifies about life’s rough times. At the end of a testimony, it is not unusual for the one doing the testifying to shout, glory!

In a testimony the source of triumph is usually attributed to the Christian prophet Jesus. While there is no mention of Jesus in this testimony, the word “glory” in the title speaks to the fortitude of the human spirit.

But before we get to glory, there is the road to glory. The road, in this debut chapbook by S. Erin Batiste, recipient of fellowships with Breadloaf, Brooklyn Poets and Cave Canem, composed of narrative, appellations, block and erasure poems, is rough.

“A Record of Everything I’ve Outlived (dedicated to my 37 years)” is a list poem of survival. The connection between the speaker’s birth and the volcano eruption is a fantastic image of one born into a life of danger signified by fire.

My first memory; soft arms flinging me
Between the teeth of an escalator
Second: my mother grinning silently from the top. (1)

The list of episodes include: kidnappings to near kidnappings; generational domestic violence; overwhelming sadness, grief and terror.

The foreshadowing of what life might hold for this girl-child are visible in verses 5 and 22.

It is a poem detailing the life of one born into circumstances with little chance of safe passage.

By the time the reader gets to the last lines of the poem, it’s clear that not even the stars have the speakers back.

In the poem “Matrilineage-after Nicole Sealy’s Medical History,” Batiste uses Sealy’s first line, “I’ve been pregnant,” adding a single word, so it reads “I’ve been pregnant twice.” The story is about beauty passed on to the speaker through the maternal line.

That revelation is jarring. The reader is left with a sense that the speaker is prey.

This poem is haunting. It reads like a cautious fairytale. Beauty for these women is portrayed as emptiness, a void to be filled.

“My mother’s sister collected the finest linens, dishes, designer silks, that her childless dollars could buy.”

And the speaker follows the matrilineal line:

The speaker does have other stories to tell.

In poems, “About the Author,” the speaker unfolds a self quite different from the heavier pieces. According to the poet’s notes, these five poems make up a traditional one hundred-line cento based on natal chart text. Natal charts, are created based on a birthdate, time, town and time zone. Here we get a glimpse into the speaker’s strengths, charm, confusion, humor, and the ever present, vulnerability.

She is successful professionally and emotionally. She is emotionally demanding and proud. She is not afraid of emotional confrontations. She is given to big displays of emotional drama. (4)

In the midst of this search, we find playfulness in poems like “Date Night and Future Dated Eulogy for the Carefree.” We also find magic, Black Girl Magic. “How to Sever Yourself from Sorrow” is a spell the speaker cast.

The glory isn’t just in the title poem, but the erasure poems. “Glow” and “Why are Black Women Attractive” make me excited about erasure poems.

The poem “Glow” was created from a skin bleaching cream most visible in Jet and Ebony magazine mail order forms in the 1950s to 1960s. Instead of erasing blackness, the poet erases the portions of the ad that promise a glow from lighter complexion.

Glow that works where it’s needed most—within where real care must begin. (27)

The poem, “Why Are Black Women Attractive” is an erasure of an article by a PhD and evolutionary biologist who caused quite a stir with his claim in 2011, that black women were otherwise.

The original article, like all fleeting things, was eventually deleted. Glory, Hallelujah!