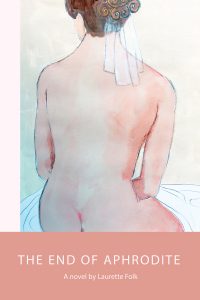 Themes of family, marriage, motherhood, forgiveness, and the recklessness of adolescence shape The End of Aphrodite, Laurette Folk’s second novel. It maintains its focus on four females: Etta, Samantha, Mira, and Joan. Men, in this novel, mainly hold secondary positions. The title refers to Etta, a modern Aphrodite, obviously capable of attracting many men. But will she, like the mythical Aphrodite, be denied her truest love?

In Folk’s presentation of the lives and loves of these four females, there are echoes of Anne Tyler’s work, and of Elizabeth Strout’s Olive Kitteridge. However, the idiosyncratic structure of this book did not provide this reader with as many of the unifying threads those other novels employ. Folk chose to present Samantha first, in a 1986 setting. To present Etta, she jumps back to 1968 along with representations of activities and philosophies of the Beat generation. The leap to this earlier timeframe is somewhat unsettling, as, so early in the novel, we don’t yet have a clear enough impression of the main characters.

When we meet Etta at the opening, she is pregnant and currently living with Patrick, her marriage with Daniel having broken. A somewhat puzzling and surreal de-flowering of teenage Samantha occurs, which also gives the clear impression that her Aunt Etta’s relationship with Patrick, in whose house she is living, is less than secure. The 1968 chapter, however, portrays Etta in Vermont, drawn toward a free-loving beatnik. At p. 35 we read:

At twilight they sat around nude on bamboo mats, smoking and drinking cheap bottles of wine. Lauren was the first to remove her goddess garb and dance in a circle with her arms out wide and her face up to the twilight sky. The crowd giggled and yahooed until moments later, they were all stripping themselves, dancing.

In subsequent chapters we learn more about Samantha. She visits her next-door neighbor, Joan, who without Samantha’s full comprehension, is longing for her daughter Elise. I found Folk’s description of Elise’s treacherous wanderings some of the finest writing in the novel. We are carried completely inside the character of this lonely, yearning adolescent.

It’s through Mira, Etta’s sister and Samantha’s mother, that the Catholic influences on the family are most strongly dealt. These are also revealed in Samantha’s anxieties. When visiting her neighbor, Samantha describes her aunt as “living in sin.” She holds herself to a high standard and feels a hopelessness about herself. “I don’t think I have a future. I’m heading headlong into the dark night of the soul.” (p. 139) She also says about herself in her relationship with Edward (p. 136):

Folk delivers an additional sub-plot element, beautifully told in Part III. Another commendable element that runs strongly throughout The End of Aphrodite is Folk’s enchantment with the creation of art, through words and through the visual arts. I hope she’ll channel this into future novels.

Laurette Folk ‘s fiction, essays, and poems have been published in Waxwing, Gravel, Brilliant Flash Fiction, pacificREVIEW, Boston Globe Magazine, and Best Small Fictions 2019. Her novel, A Portal to Vibrancy won the Independent Press Award for New Adult Fiction. Totem Beasts, her collection of poetry and flash fiction, was published by Big Table in May 2017. Laurette is a Pushcart Prize nominee and graduate of the Vermont College MFA in Writing program. Her website is www.laurettefolk.com

Carole Mertz reviews frequently at Copperfield Review, Dreamers Creative Writing, Eclectica, and Mom Egg Review, with current reviews at Page & Spine and Main Street Rag. She is book review editor at Dreamers and is the author of Toward a Peeping Sunrise (poetry chapbook, Prolific Press, 2019).