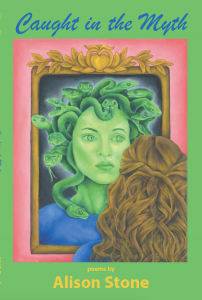 Alison Stone has written three chapbooks, and six full-length collections of poetry, including Masterplan, a collaboration with Erik Greinke, and They Sing At Midnight, winner of the 2003 Many Mountains Moving award. Widely published, she is also a yoga instructor, a psychotherapist, and an artist, who designed a Tarot deck using her own paintings, and who painted the green Medusa on the cover of this book. She lives in upstate New York.

Caught in the Myth is well-titled. Essentially every poem in the book is a brief meditation on a myth of some kind, from how Athena must have felt, lacking a mother, to whether the tv show “Pretty Little Liars” is teaching violence along with empowerment. Though many poems in the book illustrate the ways our myths oppress women, in other poems the women themselves use violence against their oppressors. The book contemplates power, and finds no easy fixes.

The first note in the back says many of these poems were inspired by sculptures in the Metropolitan Museum in New York, and the National Museum of Rome, and the book reads like a long voyage through a gallery of images from ancient myth and history. We consider Arachne, Athena, Midas, Sisyphus, Demeter, Jezebel, Vashti. Interleaved with these giant figures are some modern mythmakers and cultural touchstones: Ivanka, prom night, the movie Frozen.

Some mythic figures recur, such as Endymion, a handsome demigod from Greek myth who sleeps and sleeps, while the besotted Moon bears him fifty daughters. Sources are divided as to whether he is forced to sleep, or chooses it. In the first of Stone’s four poems about this myth, entitled “Endymion,” everyone wants the young man to wake and work, but he loves where he is: “All/ striving gone. Every night the silver/ lady with her hands of light” (41). But over the four poems, the dream sours. In “Endymion Explains,” it’s clear he’s become a version of the knight in Keats’ “La Belle Dame Sans Merci,” his “life reduced to lying splayed on dew-damp ground” (75). Being favored by the gods is extremely dangerous for humans.

We in the modern world are endangered not just by gods, but also by those we are expected to revere. In “Covenant,” the speaker is schooled about her role as a member of the chosen people, and then “the cantor’s hands wander/ in his locked office.” What happens to the speaker? She endures this sexual abuse “For the heft/ of specialness. Being chosen” (37). The system she’s in teaches her she needs to cooperate with evil.

What happens when modern myths go viral? “Reeva Steenkamp” considers the young woman shot to death behind a door by her lover, Olympian Oscar Pistorius, who claimed he thought she was an intruder. “I’m just/ the dead girl, forgettable,/ common as a shoe” (66), she says to end the poem. The line break after “just” stops us on that word, a crucial one to Stone, who quietly and not so quietly points out the violence wreaked especially on women, while we live according to these myths of which we may not even be aware.

In “Pretty Little Pantoum,” Stone uses the pantoum’s braided, repetitive form to shed light on themes in the teen show “Pretty Little Liars.” A clique of high school girls falls apart when their leader goes missing. Threatened by an unseen assailant, they begin to fight back. How do women assert themselves in a male-centric world? In pop culture, must violence always be braided with power? Stone’s answer here is a firm yes: “Though the heroines are resourceful and smart,/ most of them kill people” (71).

Back in the world of Greek myth, in “Medusa,” the choice for women again would seem to be between the invisibility of socially sanctioned behavior, and the monstrous loneliness and violence of declaring the self:

It beats invisibility,
the hell of insignificance
most women are dismissed to
when their prettiness fades.
Evil has its own loveliness.

Though I’m lonely,
life is not without pleasure—
wine by the fire, a cat
in my lap. Outside, on my neat
lawn, stone men line up like suitors. (68)

The pull of our myths is irresistible, and that’s how we can end up turning others, or ourselves, into stone.