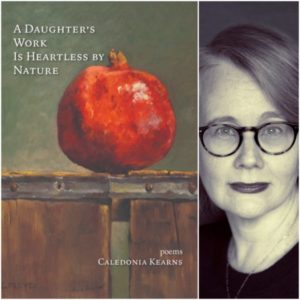 A Daughter’s Work is Heartless by Nature, by Caledonia Kearns, elucidates the godlike wisdom and mortal labor required to forge a relationship between a mother and a daughter. Kearns crafts the language and symbolism in her poems with precision. She vividly conveys the moments of loss, pleasure, and joy which are inherent in the complex love between a mother and a daughter; moments that can make a mother feel like a goddess or remind her that she is completely and uselessly mortal.

The Greek myth of Demeter and Persephone informs both the structure of this book and the framework of the narrative poetry within each poem. Demeter stands distinct in the Greek Pantheon because she is a goddess who is neither maiden nor married; instead, she is a single mother to her daughter Persephone. In the references within the poems to the mother/daughter mythology of Demeter and Persephone, Kearns fuses the narrative of Greek myth with the life of a modern single mother.

Kearns anchors this epic myth to the mortal experience throughout the collection. In “I’d Like to Put My Marriage on the Wall” the divine is hidden in the everyday work of being a mother. A mother washes dishes and thinks that “After my daughter was born I thought I was through /with poetry, then my husband left and one night as she slept /words came back. I found them in the sink with Cheerios /and broccoli stems, wrote them out with soapy hands//” (31).

The poem “A Daughter’s Work is Heartless by Nature” includes the speaker as she, almost conversationally, discusses the complexities involved in the work of mothering and being mothered. The mother, a goddess endowed with great powers, still stumbles her way along the darker paths of motherhood:

The mother requires finesse —
a stretchmarked Venus on the half-shell
minding the store. A daughter’s work
is heartless by nature, though hard to admit.
You might think you love me more,
can’t yet see you will cross oceans,
board planes, run fast, then faster
while my heart bleeds. But loss can be learned.
It just takes practice. Don’t look back. Eat the six seeds. (51)

Kearns distills generations of learned experience into impactful phrases throughout the collection. The poems speak of separation and distance as mother and daughter try to build connections with each other. “The Law of Gravity” conveys one lesson in survival:

I stayed behind as you walked across a narrow two-by-four
to keep us above water. You taught me what love is,
to follow the law of gravity, sink down,

weight in my heels, close to the board. How to balance,
arms out, even as my legs tremble…

…You gave me my own piece of lumber
so I’d come to my own rescue, place foot in front of shaky foot/

The protective nature of secrets is a poignant in the collection. Just as the daughter must travel into the darkness without her mother; the mother is lost in darkness without her daughter. In these poems, there are repeated examples of mother and daughter hiding the details of this darkness from each other as a form of protection. In “Joint Custody” the mother notes that the daughter “…builds a fort before leaving for her father’s– /…When she first stayed at his separate house, /I failed to recognize the woman carousing / in my red shoes after dark –// even my face had to change – muscles rearranged. /Every night she’s not home, I avoid her empty bed” (25).

Kearns’ collection of poems creates a memorable modern-day legend about the complexities of motherhood: the secrets she holds, the joys she shares, and the depths to which she is willing to go to save her child. Goddess Demeter defined earthly seasons of abundance and loss. Kearns’ poems emphasize the lessons that all mortals must learn– lessons of loss and love; rescue and retreat.

Caledonia Kearns is the editor of two anthologies of Irish American Women’s writing. Her poems have appeared in Drunken Boat, Painted Bride Quarterly and Natural Bridge, among others. She has contributed to essays and articles to publication including The Awl, The Boston Globe, and The Hairpin. She lives in Brooklyn, New York.

Kimberly Bowcutt lives in Orange County, California. She is a developmental editor specializing memoir and fiction. She is a mom to five children and grandmother to three.