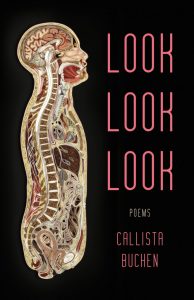 In this unique debut collection of prose poems, Callista Buchen, the author of two chapbooks of poetry. examines the darker side of pregnancy and motherhood. From the imperfect act of mothering to the loss of a baby, her poems dwell in the world of expectation, disappointment, and realism. It is the first book I’ve read about motherhood that posits the permanent and fleeting ways in which pregnancy alters a woman, for becoming a parent is, in itself, an act of transition. The violence of birth is manifested in a poem, “I can’t remember the women/who took my voice or the blood that carried it away. There were/two girls with mops. This is later though.” (5).

Callista Buchen’s use of surreal and grotesque imagery captures the otherworldly process of birth, loss, and a grief that has a beginning but no real end. In a sense, a mother who loses an infant has lost a part of herself that never had the opportunity to become independent. When the narrator emerges and again gives birth, her lost child is ever present. “This is how ghosts hold hands, how a mother calls, / how to join, be process. How another house, another body, how/to build. Remade, this is how” (19).

The lost child becomes the living child, as love evades the linear constraints of time. Motherhood challenges a woman to balance herself with the needs of a wholly dependent being, just as pregnancy transforms the body. Buchen isn’t afraid to describe the ache of breasts filled with milk, the belly swollen and unfamiliar, nor is she reluctant to address the loss of self that can ensue as the process of nurturing an infant becomes all-consuming. This is an unflinching and important collection. There is a comfort to reading that one is not alone in the fear of an altered body or the loss of self after giving birth. The prose poem format contains the poem, like the womb contains the developing fetus. These blocks of poetry also build a structure through which the reader, like the mother will pass from loss to fear to grief to wonder and back again.

There is a tendency in our culture to view motherhood with a Madonna-like reverence. This collection celebrates pain, the leakage of milk on sheets, the blood of the afterbirth, children both missing and present. The collection, like the poems, is not linear. The lost child is present in a child’s story Blueberries for Sal where Sal gets lost and follows a bear mama and her cub instead of her own mama. This story, read to the poet as a child and read again to her own children safely reunites Sal with her mother but not before the poet has observed the possibility of danger in the bigger world, and the innocence mothers try to wrap around their children for as long as possible.

In Part III of the collection, Callista Buchen invokes the child lost in forms filled out in doctor’s offices. That pregnancy, like pregnancies resulting in live births, is indelible. In the title poem, windows with broken seals remind her of pregnancy, and the cells of her children, “Later, I read that the cells of children move through the/placenta, latch on to the mother’s lungs, liver, brain, her skin./The daughter’s cells, the cells of the new baby, the cells of the baby/that was lost (31). Once again, she leaps from a physical act of washing windows to broken seals and the lives that inhabited her body. The poem ends with the innocence of a child asking about her navel, that remnant of attachment.

There is a languor to Look Look, Look. The expression “milk drunk” comes to mind. Any woman who has nursed knows the sated quality that comes over an infant after he or she has been fed. As the poet both grieves and celebrates her loss of autonomy, she also basks in the ways time slows, each moment becoming a snow globe, the hours imprinted and contained. There is no map or guarantee of safety in act of being a parent. Ultimately birth begins the process of letting go. In this fine debut collection, Callista Buchen helps us to acknowledge both the sadness and triumph at each stage of motherhood, while marveling at the tenacity and power of women who choose this path.

Lisa C. Taylor is the author of two collections of short fiction, most recently Impossibly Small Spaces, and four collections of poetry. Both her fiction and poetry have been nominated for the Pushcart Prize and she received the Hugo House New Works Fiction Award in 2015.