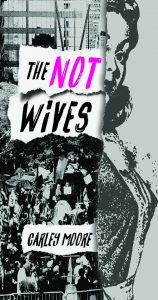 Carley Moore is an essayist, novelist, and poet. The Not Wives is her debut novel. (Last year, Mom Egg Review reviewed Moore’s debut essay collection, 16 Pills). The Not Wives, set in New York City just before and during Occupy Wall Street, it is an explicit and gritty yet authentic and unapologetic exploration of issues of womanhood, motherhood, class and wealth in today’s society.

I’m not regular. People think moms are boring and not political, but some of us are broken, queer, crazy, loud, sex-positive poet single mamas so don’t underestimate us or call us regular. (178-79)

Moore braids together the stories of several women: Stevie, a college professor and mother who is going through a divorce (“…I’m just a woman who is no longer a wife. The not wife.”) 105, Mel, her bisexual best friend, who is struggling to find her place in an open relationship, and Johanna, a homeless teenager Stevie meets in the park (“…I am a nearly dead thing, a husk of an earlier version of myself, just like the one who jumped.”) 83.

Sprinkled throughout the book are lyric essays that speak to the collective experience of wives, husbands, and occasionally children.

Both Stevie and Johanna witness a female student, Madison Reilly, commit suicide by jumping off the 8th floor of a campus building, and her story is intertwined as well.

We’d both been witnesses to a girl in transit, passing out of this world and into another. I’d seen her fall from the sky and she’d seen her make contact with the earth. Somehow, I felt this connected us. (58)

As a former single mother, there was so much I related to in this book, from the quotidian details to the weird dichotomy of shared parenting—when you have your kid, you are in full-on mom mode, but when your ex has them, you have a single adult life, free to go to bars or protests until all hours. I’ve never seen a novel explore this aching yet liberating contradiction.

On the days when Sasha was with Aaron, I could go anywhere and do anything. I didn’t have to ask permission, figure out childcare, be home at a certain hour, or even check in with anyone. (190)

Moore also captures the heartbreak, anxiety, and terror that I personally experienced as a single mother. I’ve never felt so seen in literature.

Moore’s language itself is poetic and beautiful, the phrasing lyrical and poignant.

I made a list of lost things. My marriage. A husband. The earliest version of him—that young man who once loved me so. Dead and gone, or at least lost to me. A girl who jumped. My apartment. Not yet, but soon. (151-152)

Stevie is the mother of everyone.

Your job in this dorm and as a teacher is to keep students from jumping, I thought. It’s to make them care enough about something—writing, a book, me, my kid, a lover, a movie, a poem—so that they don’t give up. (68)

Yet Stevie is allowed to be “both strong and broken” (110), as Johanna describes her. This reminds me of a friend’s words from my own single mama days that became my mantra: “I am so fucked up and beautiful.” This to me is the beauty of this book. The women are wounded, strong, fierce, self-doubting, always authentic and brazenly laid bare.

Sex is not written about through cagey euphemisms, but rather with full disclosure that I haven’t seen in a work of literary fiction before, and I found this revolutionary. In my opinion, social media portrays mothers as asexual bodyless creatures, without physical needs beyond coffee, wine and chocolate. Moore’s female characters are unapologetically human, with bodies and desires. The same goes for her queer characters—they are flawed, complicated, and fully formed.

Moore is one of the most exciting recent voices in feminist literature, and The Not Wives is a must-read for any divorced parent.