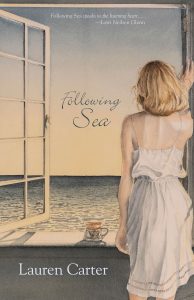 Lauren Carter’s second book of poetry, Following Sea, summoned crisp winter air into the humid heat of my July afternoons. As Carter chronicles her ancestors’ journey into the Canadian wilderness and reflects on experiences with infertility, I wanted to tease her thread-lines from the sky and weave them around my body. The silk ribbons her words made slipped around my neck where they’ve stayed—stories sure and snug—despite the days that have passed since I closed the book. With its keen imagery and sharp insight, I think you’ll find Following Sea a compelling read as well.

In the tradition of her fellow Canadian Margaret Atwood (The Journals of Susanna Moodie,1970), Carter draws on homesteading histories. In lines spare and sharp and satisfying, she imagines lives for people who only have a few facts attached to their names in logbooks and registers. Carter’s inquiry connects her to her kin, especially the women whose mere survival seemed remarkable. She outlines moments, her sketches suggesting the fullness of their lives: “Before dawn had burned / the ice off the night, Margaret / stirred ashes” (“Ghost” 1-3). Carter’s language may be simple, but her poems are not simplistic; through artful combinations, she fashions unforgettable images out of ordinary words. In “Louth (1851)” for example, “Ships nudge their openings, / white sails falling / like the wings of a hawk” (3-5). That movement made me gasp. Sometimes transformations are subtler, as in “Home (1854)” where she remakes the image of sky and lake:

It’s a relief to see
the lake: dome of sky

over slate, white
script of waves
like a letter
sent from home. (15-20)

I admire the waves-made-letter and the connection between two places the new image conjures.

I’ve been a fan of historically based poetry for years, but Following Sea distinguished itself because Carter linked personal and historical themes. She did this in (at least) two ways. First, she sustains the imagistic landscape within which she explores them, circling back to natural images: animals, sky, water, fire. These elemental images function perfectly to unite past and present. Second, she arranges the poems novelistically, tensions heightening and tightening until they make a gesture toward resolution. Her opening poem, “Historian,” links her research for ancestors and motivation for it:

I look backwards
because the future
is too hard to bear: another
bitter winter, so many
empty snares. (31-35)

In the five sections that follow, Carter introduces us to the speaker, her family, her ancestors, and their environmental contexts; she includes poems that address infertility more directly toward the end. The interconnectedness of the sections makes this collection of poems feel like every poem contributes to the whole. The final section, “Mother’s Day” moves out from the research and through the pain of infertility.

Carter’s spare style, consistent throughout the book, feels most profound in the fourth section, “Barren.” Perhaps this is due to the figurative language essential to expressing experiences that demand such precise interpretation, such as infertility. Some imagery, like this one from “October,” seem innocuous out of context:

The quiet morning
draws clouds
across its lap
like laying
a napkin
before a meal.

But inside the poem, the speaker wants to be eaten, to be swallowed whole. Infertility, such a scarring pain and yet one with so little physical manifestation, often yields no closure. And few women are open about this grief. In “December,” the pain of infertility inverts the beauty of the season; the speaker chisels gifts “until they crumble”(4) and become “red dust” (5) she cups in her hand. But the most imaginative and evocative part of this poem is the final image, which portrays holiday shoppers with grey eyes

the mourning
doves perched frozen
on the line. (25-29)

It’s the details of life and the natural world that seem to save the speaker from complete despair. The final section, “Mother’s Day,” doesn’t celebrate a pregnancy carried to term but the acceptance of the present moment—poetry, the senses, nature, and a place that holds potential. It’s the honoring of these small acts of recognition—here and throughout the book—that bring satisfaction.