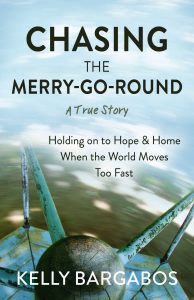 Chasing the Merry-Go-Round: Holding on to Hope & Home When the World Moves Too Fast by Kelly Bargabos

Halfway into Chasing the Merry-Go-Round, I thought this was yet another story of someone (the author-narrator) trying to help someone else (her brother) without that person being ready to help himself. Knowing from personal experience that such efforts almost always fail, I wondered how it would end. Then came the suggestion of an explanation, followed by two diagnoses—Fetal Alcohol Syndrome (FAS) and narcolepsy. I had fallen into the same trap as the author herself once had. I thought her brother unwilling to turn his life around. It turns out he was unable.

Chasing the Merry-Go-Round: Holding on to Hope & Home When the World Moves Too Fast is, as its cover proclaims, the true story of Kelly Bargabos and her brother, Bobby. This 2018 memoir was a Nautilus Book Award Silver Winner and a finalist in the National Indie Excellence Awards. A CPA by trade, Bargabos has a passion for sharing her brother’s story and advocating for those with invisible disabilities. Her writing has appeared on Medium and in Mom Egg Review, The Mountain, and The Post Standard. She has also placed well in several writing contests.

Bobby was adopted at ten months from birth parents who neglected and abused him. From the start, something seemed not quite right, from speech impediments to behavioral issues. He ran away at age 16 to reconnect with his birth parents, with disastrous results. Unable to hold down a job or establish healthy relationships, Bobby bounced from place to place, refusing his family’s help, especially that offered by Kelly, who, as she says, “carried the weight of everyone’s emotions” (95).

The memoir alternates between Bobby’s story and Kelly’s as she goes through therapy upon discovering her husband’s affair. The two journeys are in important ways parallel, particularly the quest for a felt sense of safety: “This story, the story of Bobby and me, was always about home” (224). For Bobby, this tends to be concrete, a not-always-linear trajectory from ill health and reckless behavior to relative stability, while for the narrator it is an inner journey that means confronting her own problems, including the early trauma she endured. I felt a lot of empathy for Bargabos as I read; I would have loved to see her balance Bobby’s compelling story with more details from her own.

The writing is clear and direct, if a bit uneven. Photos and Bobby’s own words enhance the narrative, especially his letter to then Secretary of State Hillary Clinton (186) and his simple, poignant declarations such as “At least I’m not just a loser” (134), or “with the small life I have, things like this make me happy” (189). Similarly, the author’s description of the title’s playground ride grabs the reader straight away:

Most of the time, Bobby is one who stands on the sidelines and watches the rest of us go ‘round. I tried for many years to help make him fast enough and strong enough to climb onto the merry-go-round. When that didn’t work, I tried running for him. I tried carrying him while I ran. I was sure that if I could just get him up on that bench, he would be okay. Instead, he has shown me what it’s like to stand on the sidelines.

And though I will always try to convince the ones pushing and pulling to slow down every once in a while–let people like him on or off, give someone else a turn–when he is on the sidelines, I will stand with him. When he walks to the other side of the playground, I will walk with him. (xv)

Chasing the Merry-Go-Round is a powerful story of family and advocacy. As mom to three adopted children, all of whom survived early trauma, Kelly’s and Bobby’s story resonated deeply with me. I especially appreciate that the memoir ends on a note of hope. It will help other families feel less alone, and it will open the eyes of those who know little about the impact of childhood trauma and invisible disabilities.

Laura Dennis is a professor at a liberal arts college in Appalachia. She manages and writes for the Attachment & Trauma Network (ATN) blog. Her nonfiction has received an honorable mention for the Betty Gabehart Prize (2017) and was a finalist in the Tucson Festival of Books Literary Awards (2019).