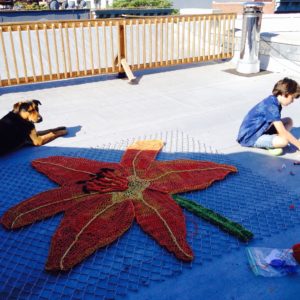 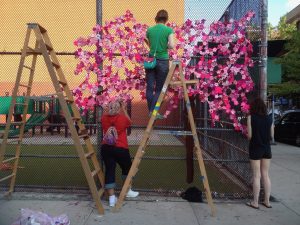 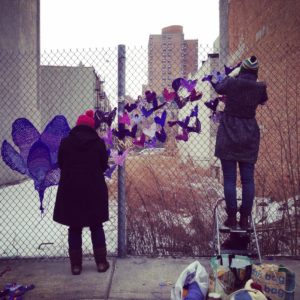 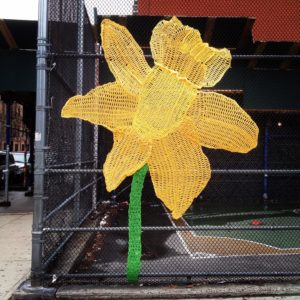 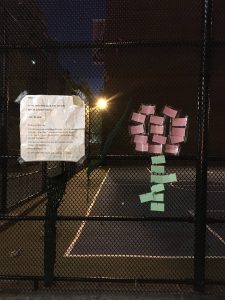 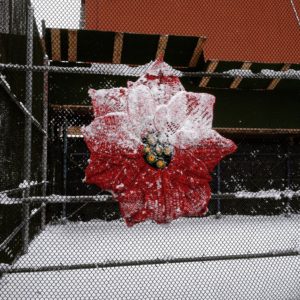 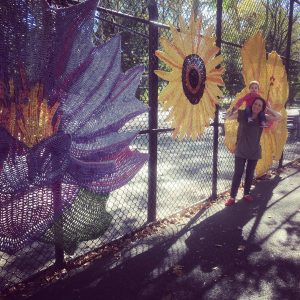 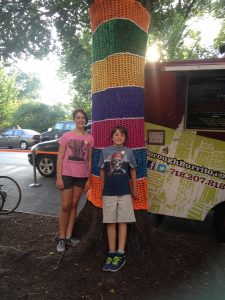 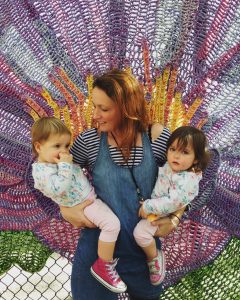 I admit I cyber-stalked Naomi Lawrence. Her flower creations started appearing around El Barrio, in NYC, about 2014, on metal fences; bright spots of improbably large flowers floating in front of abandoned lots.  Blue iris, orange daylily, crocuses, cherry blossoms, daffodils, hibiscus, lotus, magnolia, and rose, thrilling in their audacity. My young daughters liked to point out the unexpected yarn art of their Spanish Harlem neighborhood to visiting playdates. City tree trunks, usually looking so sad in their untended pits, threatened by erosion, litter, and neglect, suddenly sported colorful stripes or patchwork, warmed and protected by this mysterious person’s art. Just after the election, I decided, “I really want to meet this woman.”

Several cross-referenced google searches later, I messaged her, thanking her for her fierce and comforting work. Soon after, she invited us to join neighbors to lift up a peace sign, made of tiny crocheted flowers, onto a fence at Lexington and 104th, the night before the dreaded inauguration. This late-night yarn bombing in the cool, dark air was a blessed moment of peaceful resistance for all of us.

Over coffee last week, I found out that Lawrence was once a florist in London who appreciated the work of Georgia O’Keefe. She has four children; two older adopted children (ages 16 and 14), and twins (age 3). Making the fiber art murals (her children call them “Mummy’s flowers” when they see them around East Harlem) feels to her a bit like giving birth, “part of you” that takes months and months to create before you present it to the world, “not knowing how the world would welcome them and how it would affect my life.”

Lawrence likes watching her work become weathered, to see the pieces “take on the environment” as she evocatively puts it. She is careful to distinguish what she does from “beautification,” a concept she identifies as problematic; she simply states that the flowers brighten corners, make use of empty fences. Lawrence makes sure to take down work that has become too worn or dirty; right now there’s one she’d like to take down. In May of 2018, her rose, installed on Valentine’s day outside of a school, was stolen. It remains a mystery. Upset, she wrote a note that expressed her shock and confusion: “They would have needed a 10 ft ladder and a pair of scissors so it was well executed,” Lawrence explained. A teacher had his class write notes to her, expressing their sadness, which they laminated and installed onto the fence in the shape of a rose. Other passersby also expressed how sorry they were. Lawrence appreciated the response: “It was incredible.”

After five years of semi-secret random acts of beauty, Lawrence wants to “step out and be bold.” She wants to enrich her relationships with neighbors. Lawrence observes that in el Barrio, “people like to tell their stories through art, through music.” She says, “I don’t want only my art to do my engagement anymore;” and has begun teaching crochet in schools and local senior centers. She runs sessions at la Galeria del Barrio with a Creative Engagement grant from Lower Manhattan Cultural Council which will result in a huge community-made mural on 121st and Park Avenue in July. Fueled by her Christian faith, Lawrence wants to “to use what I do to love my neighbors more.” She knows from experience that the deeper relationships she seeks will happen more organically in the slowed-down space where she teaches the interlocking loopings of crochet alongside grandmothers, mothers, and their children. 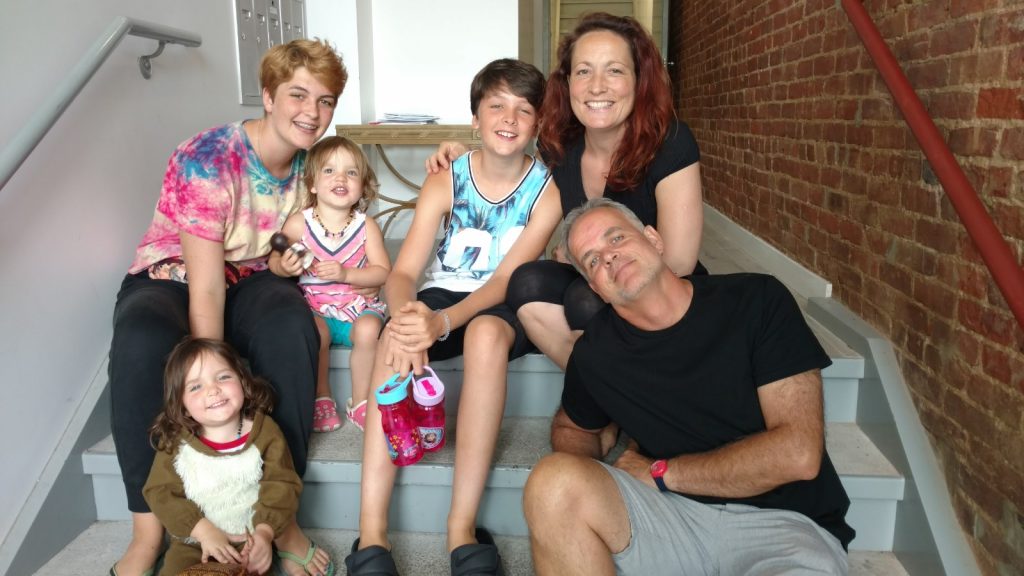