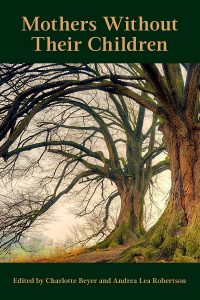 Two and a half years ago, I found myself questioning my identity in the face of a marital separation. Larger than the question of who I was beyond being a wife, was the deeper interrogation of who I was when my children were gone. Since their births, the contours of my life have been shaped and sanded by their astounding existence. I knew I was a writer, and a teacher, but shared custody initially left me reeling in a house too quiet and too empty. Mothers Without Their Children, edited by Charlotte Beyer and Andrea Lee Robertson, opens with an introduction in which Beyer asks, “Is a mother a mother without her child or children? Is she tragic, diminished, or robbed of her purpose and identity? Or is she liberated, free to redefine herself, inviting alternative reimaginings?” (11). The editors inquire and seek to answer these questions through both creative works and scholarly approaches.

The book is divided into five parts: “Part I: Textualities and Ambiguous Mothering Status”, “Part II: Institutional Frontiers and Othered Mothers”, “Part III: Having to Live and Mother through It: Economic, Geographic, Political, and Racialized Inequities”, “Part IV: Motherhood Reconfigured by Death”, and “Part V: Navigating and Resisting Exile.” The editors hoped to continue journeying into underresearched territory, in the vein of critic Elaine Tuttle Hansen and Rosie Jackson, engaging in a public debate about “the meaning and practice of motherhood” (Hansen qtd 15) both in the private and public spheres.

Beyer and Robertson have curated a rich creative and scholarly experience for readers. Highlights of the volume include Brittnie Aiello’s “’It Was Like My Soul Was Back’: Pregnancy, Childbirth, and Motherhood during Incarceration” an ethnographic study of four incarcerated women separated from their newborns. Readers gain access to the painfully complex experience of labor and delivery as an inmate (as in being handcuffed to the hospital bed), as well as navigating new motherhood while in prison and without their children. The piece concludes with a call for prison reforms that include alternatives that allow for early bonding between incarcerated mothers and their children. Racheal O’Donnell’s “Figure Drawing” was an affecting prose poem that charts how the topography of the speaker’s life and body have been transformed by loss and life as a mother with and without children. O’Donnell writes:

Throughout this volume, each chapter acts as a guidepost on a charted path for reconsidering, and thinking critically about motherhood. From personal narratives to critical readings, from documenting the activism of single mothers against the U.S. Child Welfare System to the production and donation of breast milk after neonatal death, readers must investigate their own perceptions and definitions regarding motherhood. At the volume’s conclusion, it is clear that there are no easy answers to the questions initially posed in the introduction, but there is rich discussion, continued debate, and further research needed. The editors have furthered this discussion, and deepened the debate by bringing vibrant voices, diverse representations, and distinct realities to the page for careful consideration.