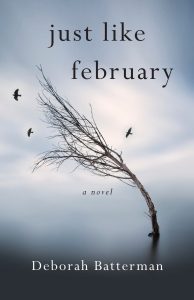 “One word. One breathless syllable, as steady, as fragile, as a hinge.
Try to say it softly.
If…
The sound lingers, the weight of the word hovers.” (75)

Deborah Batterman’s novel, just like february, is filled with lyrical prose in this coming of age story. As the story begins, we join Rachel in watching the dynamics between her Vietnam veteran father and anti-war mother as they prepare to finally wed. Her grandmother—the family matriarch—adds her own drama to the occasion, and we meet the rest of the quirky siblings. Rachel is often relegated to the role of an observer of her chaotic yet loving Jewish family.

Rachel’s parents often seem to exist in a world unto themselves, without much thought for their daughter. Rachel’s aunt and other relatives are likewise immersed in their own problems. The grandmother has quite a strong personality—one in which I could hear echoes of my own relatives’ voices.

I’m telling you, the world changed that day the Beatles appeared on Ed Sullivan. And not for the better. Boys started looking like girls. Girls stopped shaving their legs. And for what? To prove that everybody could be slobs together? (39)

Grandma is a handful, surely, but her love for her family is unwavering. The characters are well developed with their own idiosyncrasies and personalities, and even though there are several moments when I wanted to strangle one or more of the various adults, they still manage to be sympathetic characters. As tumultuous as this extended family can be, there is a strong love running throughout the book.

But it is Rachel’s relationship with her uncle Jake that is her saving grace, and when he moves away, their bond is kept alive through letters and visits. Rachel’s relationship moves from hero worship to something deeper as she slowly realizes he is gay and what that means at the start of the AIDS epidemic at the beginning of the 1980s.

Deborah Batterman is a native New Yorker, and she writes the city as only someone who grew up there could—with an eye and ear for the breath and life of the city itself. To borrow Rachel’s words, it’s obvious that New York City is for Batterman, “someplace you have been to so many times you can smell it with your eyes closed.” (78)

Firmly rooted in time and setting, just like february follows Rachel through her childhood and into her teen years as she struggles to find her place among a set of grownups who always keep the spotlight on themselves. Patterson writes eloquently about this liminal space between childhood and adulthood, and her prose beautifully captures Rachel’s emotions:

The writing, which is strong throughout the novel, really shines when Batterman captures the restlessness of grief.

No thinking, just moving. No talking. No stopping. Following patterns in the sand. Bird prints. Footprints. Looking for messages in bottles washed ashore. Anything to keep moving. To avoid the jagged pain that cuts to that deep, still place. (227)

This is what makes the book stand out—her absolutely gorgeous prose. just like february is a wonderful literary novel that explores family and society through the eyes of an observer looking out from the inside. As a child of this time period, I enjoyed the cultural references that put me right back in that time.

Deborah Batterman is the author of the short story collection, Shoes Hair Nails. She is a pushcart nominee and her award-winning fiction can be found in the Women’s National Book Association centennial anthology. She writes both fiction and essays, works as an editor/proofreader, and conducts workshops as a teaching artist for elementary and middle schools.