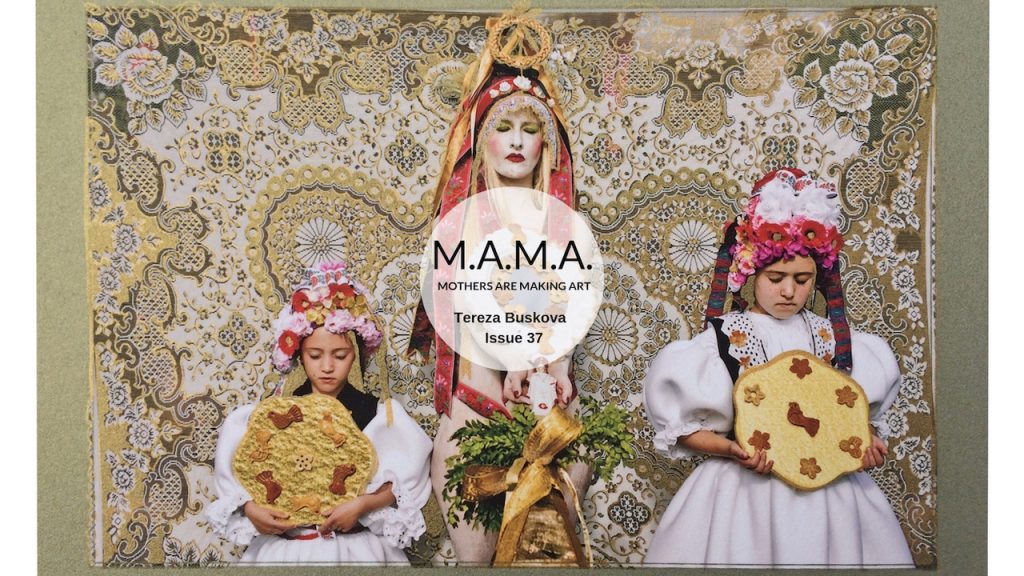 In many cultures, even today, new mothers and their infants are subject to a period of physical seclusion or confinement from the rest of the world. During this time, the support of relatives and the local community plays a vital role in sustaining the family by caring for the older children, providing food and completing chores typically carried out by the mother herself. It is hard to imagine now that things were not so different for the generation of our own great-grandmothers.

No longer restricted by this custom, women today enjoy the benefits of improved healthcare, education and childcare options, which grant them greater freedom than ever before. Yet the stigma and judgement that come with pregnancy and early motherhood linger, whereas support of the local community has all but disappeared over time. Today’s society too often adopts a patronising, utilitarian attitude which blinds it to the particular needs of parents and families. As a consequence, many new mothers experience feelings of loneliness and isolation from their social networks, unknown to them before. Some feel actively ostracised and judged when they should be encouraged and cherished.

Clipping the Churchis a project based on an old English tradition in which parishioners ‘clip’ their local place of worship with hands and bodies and sing songs of a celebratory nature. The overarching aspect of this custom is inclusiveness and Buskova married it with the representation of motherhood expressed by the act of baking and sharing baked goods with family, friends and anonymous members of the community.

Dressed in traditional Czech outfits, ornate with sensuous red ribbons and elaborate baked accessories, two women lead a procession via Erdington’s High Street. Their white skirts are decorated with flowery patterns and bunched around their hips, emphasising the connection with nature and its fertility.  The work subtly harks back to the history of Erdington, which remained a rural area until recent times. Accompanied by two young girls and followed by a simple wooden frame made of celestial crust (sugary pastries based on an old Czech recipe) topped by a small figurine of Virgin Mary and carried on men’s shoulders, the procession was joined by a multinational crowd, old and young. All precincts vanished for the duration of the performance and the lively chatting was underscored by accompanying cello music performed by Bela Emerson, resulting in a festive atmosphere that resonated within the surroundings.

One of the most moving and symbolically saturated moments of the procession took place upon its arrival at St Barnabas Church’s gate. There, Frieda Evans, the parish priest and the artist invited the crowd to ‘clip’ the church. Despite its overarching religious connotations, the act of forming a circle around the church added a universal dimension to this Christian custom. The church, decorated all the way around with sourdough breads in elaborate shapes hanging on red ribbons from the building’s façade, echoed the human bonds created around the church. Prepared by Buskova and the community members, this simple bake became a gesture of kindness and generosity. With the act of sharing and consuming the celestial crust, ‘Clipping the Church’ was finalised. The custom was reinvented, becoming not English, not Czech, but an inclusive community act.

Tereza Buskova(b.1978, Prague) completed her Fine Art Printmaking MA at the Royal College of Art in 2007. Her intuitive practices capture and renew Czech folk traditions through a combination of film making, screen printing and performance. Buskova’s work has been exhibited at Rituals, David Roberts Art Foundation, London (2008);  A Tradition I Do Not Mean To Break, Zabludowicz Collection, London (2009);  Rituals Are Tellers Of Us, Newlyn Art Gallery, UK ( 2013); and Reality Czech: the Czech Avant-Garde, Whitechapel Gallery, London, 2015. She has exhibited, performed and lectured in a broad range of different spaces including Lincoln’s Chambers Farm Wood (2010), Kunstnernes Hus, Oslo (2014), and Erdington High Street, UK (2016). 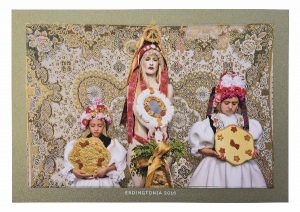 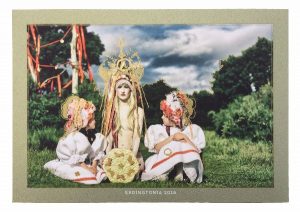 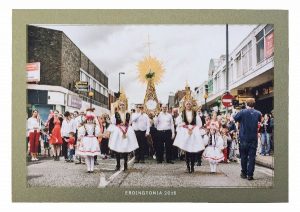 The longest person’s eyelashes were ten inches,
or maybe six. I think 8. She lived in China,
my daughter tells me, who is nine, like the youngest soccer coach, in Barcelona, which,
she says, is the best. The length of your integrity
is directly correlated to your forearm in prayer.
If you want to be seen as a woman, wear a string
of pearls. If you want to be seen as everything,
make yourself scarce. Math is comforting, my
daughter says, because the answers are clear.
Meanwhile, the length of time between school
shootings decreases at a rate comparable
to the disappearance of the words “climate change”
from government documents. Or the disappearance
of ice in the Arctic sea, or honeybees from warm
habitats. Yesterday, Sudan, the last Northern White
Rhino was put down in Kenya. The buds that bloom
beneath my daughter’s breasts are harder than
I remember on my own body, my own breasts,
whose alveoli no longer make milk. If you squint
at two women, they can almost be one.

Caitlin Grace McDonnell was a New York Times Poetry Fellow at NYU, where she received her MFA. She has published a chapbook, Dreaming the Tree (belladonna books, 2003) and a book, Looking for Small Animals (Nauset Press, 2012). Her poems, essays and book reviews have appeared in numerous print and online publications, including Salon, Washington Square, Chronogram and more. She teaches writing in Brooklyn, NY, where she lives with daughter, Kaya Hope.

M.A.M.A. is a collaboration among The ProCreate Project, the Museum of Motherhood and the Mom Egg Review.