“House/hold” is part of a research project on women’s position in the western society. It examines the evolution of gender equality in various subjects.“House/ hold” investigates the housework gap and its consequences while it provides an ironical solution for women: a 30 minute yoga session combined with domestic chores.

The session transforms the house into a space for meditation using domestic objects as its basic elements. Housework is being transformed into illumination: the repetitive act of house making becomes not just a physical but also a mental and spiritual act where women and their household objects become entangled. “House/hold” is a guide for domestic meditation.

Since the 1960s there have been lots of achievements in the path to gender equality in western society: The gender wage gap narrowed: In 1979, women working full time earned 62 percent of what men earned; in 2014, women’s earnings were 83 percent of men’s . The number of women in 1 the labor force with a college degree tripled: from 11.2 percent to 40.0 percent . Woman don’t 2 have to choose between a career and having children: while in the 1950s only 17 precent of mothers were in the labor force, in 2005 more then 60 precent of mothers with preschoolers had a paid job and 75 precent of mothers with school-aged children were working . And yet, certain 3 things didn’t change that much.

Due to industrialization and the proliferation of domestic appliances the amount of household chores done by women has dropped. On the other hand, the gap in housework distribution between men and women didn’t shrink that much and even worse since the 1990s it has been shrinking at a slower pace.

In the Netherlands, according to the Dutch Sociaal en Cultureel Planbureau (SCP) women spend 4 on an average 9 hours more on housework than men.

In households with children this gap is even bigger: According to SCP, Dutch mothers spend1 an average of 20,6 hours a week fulfilling domestic chores and 4,4 hours on childcare and mothers with children under the age of 3 years spend 18 hours a week on childcare and 20,6 hours on domestic chores: 15 hours more than men. According to The Second Shift written by Arlie Hochschild, mothers do at least a month unpaid work more in a year than fathers.

One of the consequences of this housework gap is that women have access to less leisure-time than men simply because they spend more time in unpaid work such as domestic chores and childcare. According to the ONS women spend 5 hours less on leisure than man on a weekly 5 basis. The survey has also found that time spent on leisure has risen for men and dropped for women since 2000. 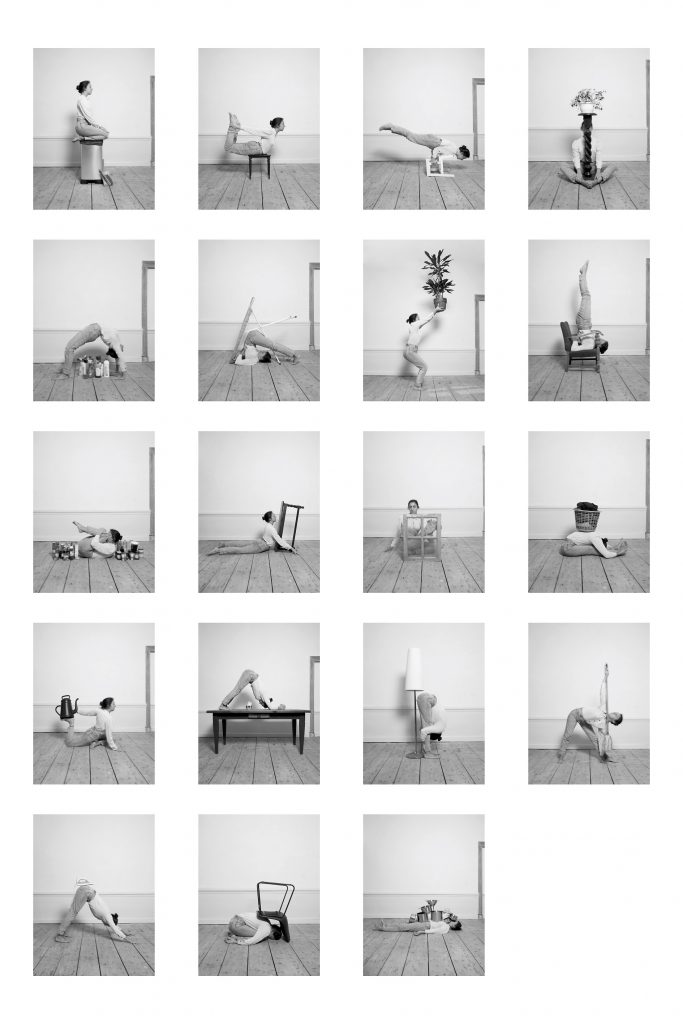 Csilla Klenyanszki was born in 1986 in Budapest, Hungary. She completed her BA Photography at the Willem de Kooning Academy in Rotterdam, the Netherlands in 2012. In 2014 she participated at SeMa Nanji Artist in Residency by the Seoul Museum of Art at Seoul, South Korea.

​Csilla’s work has been exhibited nationally and internationally. She has recently won the Still life prize at the 33rd Festival International de Mode &amp; de Photographie in Hyères, France and her first (dummy) book “Pillars of home” is shortlisted for Unseen Dummy Award 2018.

“A search for balance with a problem solving attitude characterises my work. Within my current practice I carefully examine and deconstruct personal – but universally known – challenges such as parenthood, gender, and the malleability of self identity through the passage of time. Works, such as “Pillars of home”, “to make time”, “House/hold” or the “Mothers in Arts Residency” aim to give solutions that range from the practical to the absurd.

Although my approach is analytic, the nature of the work is highly playful and experimental. To give a new perspective I often play with the borders of nonsense with a constant attraction to physical and mental tension.”