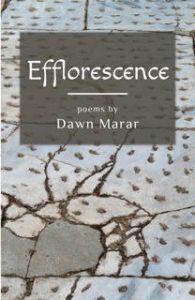 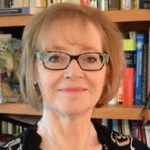 In Efflorescence, Dawn Marar navigates borders — between America and the Middle East, between family and political life, between art and nature — and even crosses a border of language, inserting Arabic words among the English lines. She is an adventurous writer — both playful and complex — who views the world through the lens of conscience. These elements blend together to create a moving, cohesive poetry collection full of intelligence and attention to detail.

Marar is adept at creating compelling juxtapositions. The opening poem, “Sparkles,” describes the parallels between the American-born speaker and her Jordanian husband as they grow up thousands of miles apart: “The girl dreamed of Jerusalem; the boy, of America” (1). In “Heavenly Bodies” we get a glimpse of this cross-cultural marriage with its love and awareness:

When Hani comes home, we drink wine
and talk about the war with ISIS. We hold
each other under the first full moon since ’67 to fall

In “Mayday Mayday Mayday,” the speaker has traveled to Istanbul on May 1, 2015, when Erdoğan imposes a security lockdown because of demonstrations on the Labor and Solidarity holiday. She and her husband make their way past “[s]huttered shops and metal barricades” as “helicopters swoop swarm” (3). On the television in their hotel room they see “footage / of the other side of the Square treated / to tear gas rubber bullets armored vehicles water cannons” (4) as well as news from the U.S.:

“On the Road to Damascus,” like “Mayday” a finalist for the Pablo Neruda Prize for Poetry, also describes a visit to the Middle East. The speaker travels from Amman, Jordan, to Damascus, Syria, in a UN van. “Weighing the likelihood of a hijacking, / I regretted my desire to see John the Baptist’s / head” (13). Both daring and fearful, she imagines what would happen if there were an explosion:

I would be no martyr. My death,
a footnote. The press would be told that I went
to Damascus to shop in the souk. (13)

Marar plays with language about listening in “Snowomen,” as the speaker in her backyard thinks of bombs in Aleppo:

I stand, hear
in the US
northeast winter.

As one mindless win
after another blows
up Aleppo. (20)

In “Cue the Leaf Blower” she merges that suburban nuisance with the deadly drones of war:

Curse its drone—the air
In which it thrives. Curse the sidewalk
Blown free of twig and leaf and detritus,
Child and dog chased
Too. Curse the drone, air
Cursed where it flies. (27)

Marar is inspired by a wide variety of sources. She juxtaposes text from a foreign policy document and an Arab folk tale in “Fusion Approach to Gathering.” The story of a raven tricking a fox is placed alongside instructions for exploiting an enemy’s weakness (21). Art, nature, and popular culture overlap in “Sea Creature,” in which the speaker views a fossil she has brought back from a trip to the Dead Sea:

Like a sweet black cherry pit with a Rock
Hudson cleft chin. (11)

In “A Story of Biblical Proportions” the speaker comes across a bottle of holy water long forgotten on a basement shelf. Now it contains “[a]n emerald gobbet…encased in a filmy viscous substance” (12). Disturbed, she replaces the bottle, affected by her discovery:

The lack of clarity
around seeing and knowing what it was—
what was there—invoked
an ancient fear of God. (12)

Efflorescence means a peak flowering and may apply to either a plant or a civilization. The epigraph, from a quote by Leader Scott, points to what happens next: “And after efflorescence,—decay; the old organization, by degrees, dissolved in the greater freedom of art.” In the eponymous poem the speaker leaps from “[p]eaking star magnolia tepals” (22) in her yard to “scraps of bandages calling up wounds” (22) to her feelings about the Iraqi war: “Her face burns as Bush declares war upon the world” (23).

Marar’s poems push readers to consider the efflorescence of our world civilizations and the aftermath of flowering, encouraging compassion: