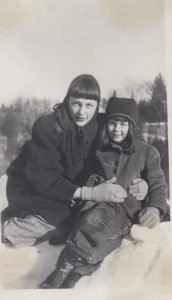 The following images and poems are part of a collaborative written word and visual art exhibition entitled The Virginia Project, which will be presented at The Wired Gallery in High Falls, New York, from 10/27/18-11/25/18. In 2014, when Tina Barry moved from Brooklyn to High Falls, she learned that the artist Marc Chagall and his partner Virginia Haggard had made a similar move to the town in 1946. After some research, Barry started writing prose poems in the voices of [Chagall’s lover Virginia] Haggard, and her five-year-old daughter Jean McNeil. Represented here are a sampling of the pieces and her corresponding poems.

The initial spark for the project was finding out that Marc Chagall had lived in the same village where I moved to from Brooklyn, then curiosity about his partner and her daughter. What kept the spark lit, was researching about how the women’s lives had unfolded, not just during the time they were in High Falls, but throughout their lives. Anger kept it going too. Virginia, if she’s mentioned at all, was often referred to as the “maid” or “mistress”; Jean was rarely mentioned in the story. My anger at women being trivialized and forgotten drove the writing and the project.

I was surprised by how easily Virginia’s voice appeared on the screen. I felt like I “got” her right away. I thought I understood Jean, too, but her pieces took some tinkering. She was a sensitive child, one who watched the adults in her life closely, so I didn’t want her stories to teeter into too sweet territory, or, god forbid, anything cute.

When I started the project, I thought I was writing about Haggard and McNeil, but I kept asking myself why their voices resonated so much; why, especially the child Jean McNeil, moved me. As I wrote it became clear that in many ways their experiences mirrored mine. In addition to Haggard and myself both moving to this small village with artist partners and finding our way in the country, there’s the issue of fathers, or, in this story, lack of them. Jean loses her father to depression and psychosis, then to divorce. My parents divorced when I was seven, and my father was rarely present in my sister’s and my life. Jean’s loss, and my loss, is present in the book. 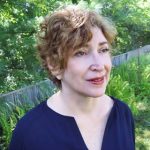 Tina Barry is a former artist and textile designer. Her writing has appeared in several anthologies including Nasty Women Poets: An Unapologetic Anthology of Subversive Verse (Lost Horse Press, 2018). Her poetry and short fiction can be found in numerous literary magazines and anthologies including Drunken Boat, The Best Short Fiction 2016, Blue Fifth Notebook. Tina is a teaching artist at The Poetry Barn and Gemini Ink. She is the author of Mall Flower: Poems and Short Fiction. The Virginia Project is the first exhibit she’s curated and her first collaboration.