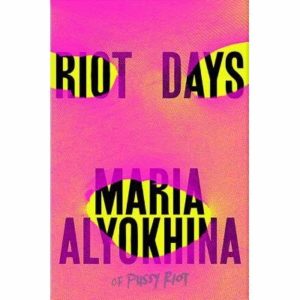 Maria Alyokhina was one of three members of the Russian feminist protest punk-rock collective Pussy Riot who were arrested in 2012 after performing their “punk prayer” at the altar of the Cathedral of Christ the Savior in Moscow. At the subsequent trial Alyokhina and her band mate Nadezhda Tolokonnikova were convicted of “hooliganism motivated by religious hatred” and sentenced to two years imprisonment. Media attention was rife and Pussy Riot divided the world – in particular the Russian nation – as to whether the performance of Punk Prayer was a legitimate exercise in free speech and political opposition or a dangerous incitement of religious hatred.

The memoir begins as the group anxiously prepare for their infamous performance at the church, then follows them through the ‘action’- their term for a political protest- and the subsequent weeks on the run around Moscow, hiding out in the apartments of sympathetic friends and acquaintances (they refused offers of help to flee the country). Throughout this time they lock themselves in cafe toilets to do interviews with international journalists via skype, wearing improvised versions of their trademark balaclavas until they are eventually captured and put on trial. Alyokhina, in this part poetic memoir and part and political manifesto, then goes on to document the next 16 months serving time in several Russian prisons before the infamous pardon by president Putin that allowed her and Tolokonnikova to be released.

Riot Days is written as a series of short scenes that link Alyokhina’s dogged and daily refusal to renounce Pussy Riot and cow to the brutal regime of the prison with the wider political context in Russia as Putin campaigns for his third term in office. This combined with diary extracts, song lyrics, quotes and poems creates a kind of dream-like world that envelopes the reader whilst generating a thrilling sense of urgency that makes the book feel impossible to put down.

Alyokhina the mother is something that haunts the periphery of the book. We only hear mention of her young son one or two times and instead see her fierce, protective maternal instinct channelled into challenging the abuses of power at the prison (whether she gets any thanks from her fellow inmates or not). Alyokhina’s tenacity gets her, amongst other things, warm shawls for the inmates and padlocks taken off the gates. When official processes fail she resorts to hunger strikes. Using the last thing she has a her disposal: her body, she subverts the regime’s intention to make prisoners into “just a body” (116) and instead becomes an embodied manifesto of resistance and protest. Her physical vulnerability, along with a refusal to become overwhelmed, “…if you give yourself over to “anxiety, it is so huge, limitless and thrilling” (117) combined with the increasing global media attention on her imprisonment, have the effect of breaking through the absolute power of the prison authorities who, incredibly, are forced to concede to her claims of illegal practices.

Riot Days is a story that offers us a twist on the accepted embodied national character evoked by the phrase ‘Mother Russia’. “We are compelled to change Russia..it’s terrifying to live here, but you cannot abandon her, you cannot abandon the body” (144). The body in this case a single mother: disenfranchised, idealistic and intelligent whose commitment to personal and political freedom brings to mind the images taken from recent marches where young women are pictured facing down far right counter-protesters. This is a tale that continues and expands the narrative of women putting their voices and their bodies in the public domain to defend rights and resist.

At a time of heightened interest in Putin’s Russia, Riot Days is an extraordinarily exhilarating read, from the moment we breathlessly accompany the young women as they flee the police to the horrifying brutality of life in a Russian prison and it could not be more relevant, (as when Alyokhina describes seeing a guard pushing a huge box of paperwork with his foot and saying these are the votes for the opposition leader he was told to dump). Yet It feels incredibly important to hear a female, Russian voice telling her story at a time when the world is condemning Russia from a peculiarly western position.

As Alyokhina says “it is not enough to announce something. You have to declare it in writing” (47). Riot Days shows us a young woman who has shape-shifted out of the grasp of her detractors – from the stage to the page – but who’s skill at making powerful declarations remains extremely hard to ignore.

Ros Howell is a writer, editor and dance movement psychotherapist working in the UK. She has a particular interest in working with mothers and their children and runs workshops and courses for the charity Mothers Uncovered. She has three elementary school age children and lives in rural Sussex