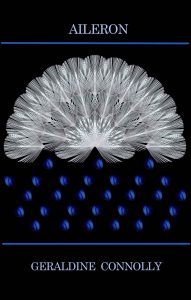 “Little wing or fin,” says the headnote defining aileron, the hinged part of the wing in a fixed wing aircraft. The title poem serves as a preface. It explores means of transport, beginning with this mysterious image, “Once I rode a one-eyed horse/ to a tree house in the forest.” (7)

In a book of poems the right symbol informs the poems but likewise, as in Aileron, the poems give tone and weight to the symbol. The narrator identifies with the aileron as she herself becomes part of time and movement and the continuation of a familial line. After the “one-eyed horse” comes the canoe that carried her, herself, carrying a child, even balloons, all empowering the progress of a life. And like the plane the aileron is integral to, the speaker is blown backward by wind to take off, exploding into motion yet managing to stay aloft.

The book describes a journey from east to west across America, as well as from childhood to maturity. In “Fable of the Good Daughter “Once I was a pleasant gauzy girl,” the speaker acknowledges, “Once like a flower I wanted to be good.” That echoing “once” that brings to mind “Once upon a time.”

Once I prayed and obeyed.
But something must always happen.
Say, a betrayal.
Bad birds come to rest. (11)

So birds introduce us to the poems, graceful fairy tales of flight that capture the displacement from the real into the realm of imagination. Aileron takes off from one location in the world or in a life to another, describing steps forward and reversals. The childhood family first, traveling like the flight of birds from or to lands rich in the fruits of the earth. The “raft/of broken bread” that ends “Fable of the Good Daughter” leads in “Hunger” to the “Dough made by flour/ and salt in the shape of change.” It tells us we are “tongue and fierce teeth,” like any living thing, coming into this world, all appetite. In “Hunger,” to accommodate us, cabbage is “chopped with fury.” (14)

With the speaker we move in memory through that first house on a lost farm in Pennsylvania. In the dining room children built a hut “from/ the cemetery of the linen closet” (16) while in the breakfast room raged “claustrophobic battles of mothers and daughters among china platters.” (15) You can hear the cacophony. With “Cinder,” the battle continues, the mother’s voice, “bitter ash.” Forgiveness comes only after many thresholds are crossed, “Now that you are gone,/ I burn the wood of my anger.” (23)

“Seckel Pear” embodies the end of childhood, the miniature fruit, child-sized, as if made for children to savor. I love how the poem slows down to capture the action, the journey of the fruit to the ground, “Nothing falls with such a slow-spiraled thud.” The last lines follow the pear’s growth and decline, so reminiscent of our own: “Before the worm’s advance/ nothing glows with such sugary flesh or sleeps/ so intent and diligent, in its soundless bed.” (26)

But when “Childhood passed/ I became feathers swiveling.” (8) Later, a striking poem, “When I See Crows,” brings to mind landings, “endings, the final flight of a jet.” Arrow-like, where do the crows point, what do they teach? Fearless flight into the future or to words withheld and lost?

When I see a flock of crows,
I think of all we have to say
to each other that goes unsaid,

words caught in the branches.

The crows could knock them free. (39)

The crows are signs of strength and daring as they fly over “storm-lashed lakes.”

And like the crows, the speaker goes on though her self-confidence, named in a poem, fluctuates “like a wild/ compass needle.” (71) In poems like “Being a Female” and “I Am Tired of Being a Wife,” she registers concern about her state as a mature woman, earthbound in the settled tasks of wife and mother, the agenda of caring. With a kind of perverse longing she weighs what it would be like “to swim in the cool pool of indifference.” (46) “Ode to My Lost Quickness” laments, “No longer the swiftness/ of a wing through air,” she, like everyone, is slowed to “amber inside a rock/… born to disappear.” (38)

So, Aileron tells us, there is the world and our escape from it. In this, the usefulness of the aileron. But the very tool that assists in flight will likely return you to your worldly existence as it does in the bright and beautiful observation of these poems.

Elaine Terranova’s seventh collection of poetry, Perdido, will be published by Grid Books. Dollhouse was winner of the Off the Grid Press 2013 Poetry Award. Her poems have appeared in The New Yorker, The American Poetry Review, Women’s Review of Books, and other magazines, prose in Boulevard, South Loop Review, and Hotel Amerika. She has received a Pushcart Prize, a Pew Fellowship in the Arts, the Walt Whitman Award, and an NEA Fellowship in Literature.