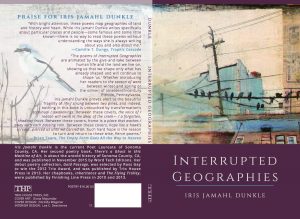 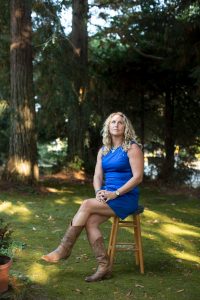 A good story can thread its way into our lives and not release us until it is told.  So it is with the prominent narrative behind Iris Jamahl Dunkle’s newest book, Interrupted Geographies (Trio House Press, 2017).  This is Dunkle’s third poetry collection, following Gold Passage, selected by Ross Gay for the 2012 Trio Award, and There’s a Ghost in this Machine of Air, and as well as two chapbooks from Finishing Line Press.

The bones of Dunkle’s collection are made of stone. Broken into three sections, each is distinct for its subject matter but linked by common vocabulary and symbolism.  Again and again poems bring forth mud and stone and light. Green describes the wood of houses built too quickly and girls who are tricked into prostitution. Blackness pervades, first as ink and later as oil.  Each poem addresses the interrupted geographies, both physical and abstract, of the title.

In the first section of the book, “Sky Parlor,” our speaker navigates the geography of motherhood.  The past rumbles under the surface of a peace that must be fought for each day.  “In Louder than the Sun,” the mother hints at the darkness beyond the present, as she dresses her kids.

As they awaken,
I dress their small bodies:
tuck layer after layer in
against what rises
in the world, and in me.

On some days history roars
like the creek swollen by storm. (5)

The poems here move between sun and inky darkness, exploring our relationship with nature. In her poem, “Dear Denise Duhamel,” Dunkle refers to women condemned by the Vikings to swallow stones until they sank into the bogs of Schleswig-Holstein (8). Later, “memory is a stone in the belly that remains / even as the oil wells run dry.”  (21) Throughout the manuscript, the idea of being weighted down by nature abounds, until in “Pithole’s Purlieu” the townspeople “came heads down / leaving stones—a foundation of regret—behind.” (32)

What follows in the second section is the story of the town of Pithole, Pennsylvania told by girls lured to the town under false pretenses, a washerwoman whose well turns to oil one lucky day, the only newspaperman, and the preacher who tried to save the bedeviled town. Once I started reading the book I couldn’t stop, so gripping is the narrative that moves from the quiet life of the speaker into the past of an oil boom town from 1865.

Perhaps because of the myriad of voices telling the story from every perspective, I felt as if the entire tapestry of a rich history had been laid before me. Each piece of the narrative that turned this empty farmland into a prospecting town exemplifies how the bounty of the earth can make us evil with greed. The second section, titled “500 Days” after the rumored amount of time that the town of Pithole lasted before it was burnt to the ground, begins with one of the book’s mythological allusions, this time to Phaeton.  From “Eridanus Remembers the Flood”:

This poem demonstrates Dunkle’s style well, with parenthetical italicized sections interrupting the poem. I at first railed against this, irritated at being given so many asides. However, as the narrative takes shape, form fits the function of what is being said here.  Even the structure reminds us that interruptions are all around us.

The third section, titled “Spring and All,” begins with a quote from William Carlos Williams’s poem, and demonstrates how the bucolic romanticism of nature is a lie.  In the series “The Education of Islands,” Dunkle remembers time she spent in Sendai, Japan before the tsunami hit. These memories clarify that landscape, assaulted in the second section of the book, can assault us back, that the earth gives and it takes away.

I skim through most books of poetry until something catches my eye, then read and reread a poem, savoring it. With Dunkle’s work, I read it like a novel, turning each page quickly to follow the thread of the narrative, awed by the depth of language and character.  The second section held me most, but the first and third sections drew me back in as I found each tendril of meaning linking the old history of Pithole with the narrator’s life.  It is a book to be read from beginning to end and then over again. On each reading, the meanings of these geographies, interrupted by our greed or our search for footing on a rocky landscape, deepen like fissures that beg to be explored.

Christine E. Salvatore received her MFA from The University of New Orleans. She currently teaches literature and writing at Stockton University, in the MFA Program at Rosemont College, and at a public high school in South Jersey. She is a Geraldine R. Dodge Poet and a regular faculty member for Murphy Writing of Stockton University. Her poetry has recently appeared or will appear in Diode, The Turnip Truck[s], The Fem, The Literary Review, The Cortland Review, Mead Journal, as well as others. More information can be found at www.christinesalvatore.com.