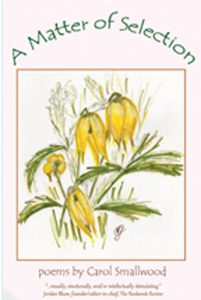 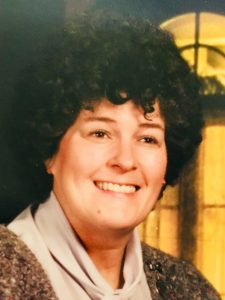 Carol Smallwood’s latest volume of poetry, A Matter of Selection, brings into sharp focus her vivid interest in both the natural world and probing observations of the daily—the quotidian mysteries present in any given life when we take time to notice and reflect upon all that we interact with in the course of a day. Ms. Smallwood—a retired librarian and the author of several novels, poetry, children’s books and educational materials for librarians and educators—brings the eye of a scientist, the heart of a mother, and the mind of a mystic to her poems, infusing all of them with a luminous, delicate, yet sturdy sensibility that is a delight to read. The central thesis of this volume seems to be found in the ending of the poem entitled “There Were Only”:

I lift my face to capture the rain of childhood and failing,
remember the earth is covered mostly with water and we know
less about oceans than the moon—and wonder how much
wonder is lost by knowing. (89)

And to “…wonder how much wonder is lost by knowing” is the right starting point for reading these poems, which I did in short bursts as I went about my day here, attending to the same mundane and life-giving tasks these poems speak to with such gentle precision. There is a curator’s eye to her poems—she’s looking to connect thematic elements in both free form and formal, traditional structures such that individual observations feel grouped as though by hand—one can feel the firmness of a palm and fingers curling around an object and considering where it should be placed to best effect. The four distinct themes explored, Nature, Moments in Time, The Domestic, and Speculations, are introduced in the preface and given an overarching structure in an observation from Octavio Paz: “Poetry is not what words say but what is said between them, that which appears fleetingly in pauses and silences.”

And in this, her poetry takes its shape and form as the interior world is woven with a close observation of nature—of plant, animal and mineral life—as it connects and interacts with the personal and interpersonal, with the contemplation of one’s own existence alongside these many and varied forms of life. In the prologue, the opening poem further settles the thematic focus on the choices—the selections—we make about what we give our attention to and how that shapes an hour, a day, or a life:

We Select
a few—the selections random: a melody, morning fog, a path
knowing with certainty at the time they’ll be ours to the end–
an imprinting sudden, as first love with no thought of aftermath:
a sunset, muffled cry, a Thanksgiving dressing, smile of a friend.

Knowing with certainty at the time they’ll be ours to the end,
They return at unexpected moments, their clarity a surprise:
a sunset, muffled cry, a thanksgiving dressing, smile of a friend
bringing feeling from depths we cannot withhold, disguise.

They return at unexpected moments, their clarity a surprise,
an imprinting sudden as first love with no thought of aftermath
bringing feeling from depth we cannot withhold, disguise:
a few—the selections random: a melody, morning fog, a path.
(7)

These poems are a lovely accompaniment to the daily round; the “poem in the pocket” that offers something to think about while doing tasks that are often done reflexively. The poems belong to the workaday as well as to the esoteric and indeed, they remind us that both coexist symbiotically—much like the Benedictine Rule of “Ora et Labora”—the monastic injunction to “pray and work”–these poems provide a comforting rhythmic undercurrent to the work of hands, hearts and minds. The poetry is deliberate and fluid—the use of repetition ensures that the emotional emphasis is made and made again—a sense of not wanting to forget what matters, as a way, then, of writing a small post-it note into the poem in way that seems so human and relatable—when the repetitions come, one leans in, wanting to pay close attention to what is clearly essential.

This is a fine and riveting work—a volume of poems anyone can appreciate from a literary, emotional and spiritual standpoint. There is no one way to read them, which is probably true of all poetry, but these invite exploration and interpretation in a way that is unusual, especially given the frequent use of traditional forms that can sometimes seem to stifle such reflection. These poems are open-hearted, with a vigorous complexity and generosity of spirit that generates a meditative calm while serving to invigorate the mind while allowing us to “come to our senses” as we read poems that are embodied, human truths and observations that can lead us to recall that we are all one human species, far more alike than different—in these poems, we can find the gentle path towards kinship and connection.

Michelle Wilbert is a writer, “poemcatcher” and retired midwife. She works as a music programmer in Ann Arbor, Michigan and lives with her husband on a small homestead near Detroit and together they are the parents of four young adult children.