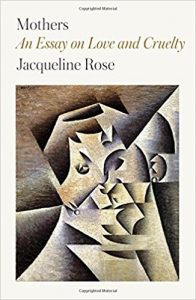 A recent reviewer of Jacqueline Rose’s Mothers: An Essay on Love and Cruelty writing in The Guardian online (herself a mother) appeared to reject to one of the central arguments in Rose’s book that “Unless we recognise what we are asking mothers to perform in the world – and for the world- we will continue to tear both the world and mothers to pieces” (2). That reviewer, Tessa Hadley, asked “Does anyone ‘outside of advertising executives’ really idealize motherhood to the detriment of us all? Aren’t mothers as much architects of the divide and conquer late capitalist culture we live in that excludes and punishes those more vulnerable than ourselves?” (The Guardian, 20 April 2018). It strikes me that it is in this essential denial that we live in a society that obsesses over mothers and motherhood continually without affording the topic any nuance, that refuses to acknowledge the projections that mothers must endure, we see the timely necessity for Rose’s book.

Jacqueline Rose is a Professor at Birkbeck Institute for the Humanities in London and has written extensively on the links between psychoanalysis, feminism and literature. Her book on the life and work of poet Sylvia Plath became well known not least because of the antagonism she received from Plath’s husband Ted Hughes and his sister, (the literary executor of Plath’s estate). She is also a regular contributor to the London Review of Books, and it was from a commissioned article for that publication in 2014 when she was asked to review the ‘many’ books out on motherhood at that time that, Mothers: An Essay on Love and Cruelty grew

The book is structured into three chapters, with the first two, “Social Punishment: Now and Then,” and “Psychic Blindness: Loving and Hating,” emphasising the ‘splitting’ (dividing into good and bad) that happens when the dominant culture uses and abuses representations of motherhood. In these chapters Rose is very clear: when it comes to mothers, they persist in being a dumping ground for the cruelties and inequities of a “viciously unjust world in a complete mess” (12). She unflinchingly catalogues example after example of where mothers have been the target of punitive public policy and rhetoric, whether asylum seekers, single mothers, pregnant women in the workplace, rape victims or non-white women. The authro notes that a political class’ fear of dependency informs its cruel and degrading policies, disproportionately impacting on poor and vulnerable mothers around the world, and describes a culture that pits mother against mother whilst simultaneously using them as a way to sentimentally individualise grief, climate disavowel (“so-called ‘natural’ disasters”) (12) and inequality.

It’s a bleak picture, and perhaps one that understandably might be hard to swallow (‘surely no-one except advertising executives manipulates mothers any more?’) but Rose also has an ambitious vision for the future. She champions the capacity of mothers to enter the political space to enact change, and to use their unique and intimate understandings of the pleasures and pains of bearing and nurturing another life to resist the ‘othering’ of all the neglected and the persecuted in this world. This becomes in part her justification of going back to the civilisation and their mythology of the ancient Greeks, where she uncovers some surprising examples of mothers being actively involved in civic life.

The third chapter is divided into Part One, on best-selling author Elena Ferrante, whose explorations into the world on mother-child relationships Rose calls “letting the cat out of the bag” (181), and Part Two, on her own experience of adopting her daughter.

Throughout the book, Rose, with her rage honed into electric sentences that feel like they have been thrust into the page like glittering daggers, one after another, rejects the image of mothers as passive receptacles, waiting to be endlessly filled and emptied of love and respect by a world undeserving of her loyalty. Instead, her call to arms aims to usher in a new era of motherhood in ethical and political life, to harness the mother “as the original subversive” (18). Rose’s blisteringly sharp indictments of our complete and utter human failure to deal with the damage and pain we do in and to the world is a exhilarating to read, and ultimately more hopeful and galvanising than any post-feminist- influenced wishful thinking that the battles for respect and equality have already been won. Despite the so-called ‘many’ books that are published exploring motherhood, we are still, she tells us, failing to grasp the problem.

Ros Howell is a Dance Movement Psychotherapist and writer based in Sussex, UK. She is a regular contributor to the MaMSIE.org blog (Mapping Maternal Subjectivities, Identities and Ethics), and until recently ran a weekly group for refugee mothers and their pre-school children in London.