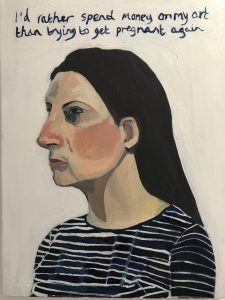 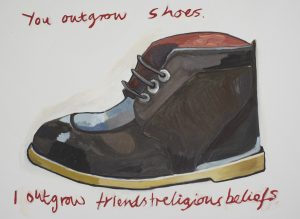 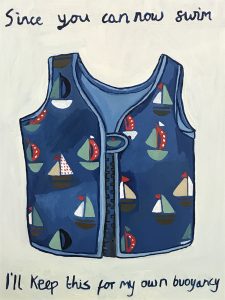 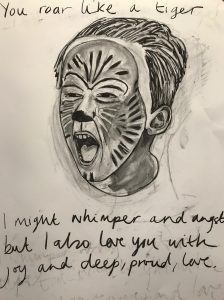 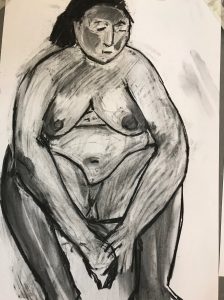 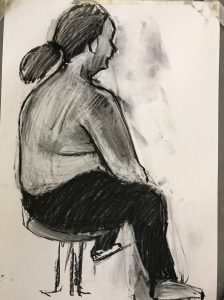 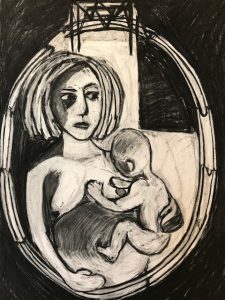 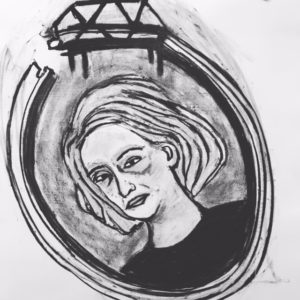 I am endlessly fascinated by the autobiographical project: how to visually portray, through texts and images, lived experience and complex feelings.

Since my undergraduate at The Slade School of Art (1995-2001) I have been making a graphic novel of my life formed of hundreds of pencil diary drawings, The Book of Sarah (Myriad Editions 2019). I have recently been expanding my practice beyond pencil drawings to include charcoal drawings, oil painting and watercolours, and the focus of these recent larger scale works is motherhood, as I parallel the growth of my son and my own journey as a mother. My son, Harry, grows and I evolve as well, we produce an imperfect equation of learning and unlearning, of progress, regression and fulfilling potential.

Linda Nochlin’s analysis in Women, Art, and Power and Other Essays (1989) of Berthe Morisot’s painting The Wet Nurse and Julie (1880), portrayed the artist’s daughter with the nurse who was breastfeeding her. Nochlin compares this work and its impressionist style to that of van Gogh, Cézanne, and Gauguin:

And if we consider that erosion of form to be a complexly mediated inscription of internalized conflict – motherhood versus profession – then surely this should be taken as seriously as the more highly acclaimed psychic dramas of male artists of the period. (53)

The strains of women’s lives do not fill the walls of the National Gallery, but male anxieties, in contrast, are celebrated. I found in Nochlin’s reading of Morisot’s work a way to describe how I, too, have found motherhood a trial, as I hold on to myself and my ambitions when faced with the demands of a dependent child. It was particularly difficult for me to give birth when, having just edited my first book, I felt I had, finally, achieved a level of competence in so many aspects of my life. I was then thrust into a world where I was an over-tired novice–facing the bewilderment of breastfeeding, nappies, and the need to assess nannies and nurseries. Nochlin’s analysis has ensured that I feel my drawings of motherhood are not only valid but vital expressions of my time in life and the world I live in.

“Harry is 4 years old, and he thinks I am a genius, which is nice. He came to visit my art studio and laughed when he saw how I had so much of his stuff in my space. He now gives me something – a toy or a book – on most days to draw in my studio! I find myself frequently uncomfortable with my artwork. I create art that I am simultaneously proud of and ashamed of, and works I am delighted to exhibit, but I also find that I want to hide the same works from the public. I suppose part of me is ashamed of my own feelings – for example, when I am expressing ambivalence or unhappiness in relation to aspects of mothering, and how I feel as a mother about myself. Carolyn Heilbrun in Reinventing Womanhood (1979) expressed this clearly when she described “the sanctification of motherhood, which prevented women from ever admitting to feelings of ambivalence toward their children”. But I really can’t make any other work than what I do. Anything else feels inauthentic, or incomplete.”

Sarah Lightman is an artist, curator and writer. She studied at The Slade School of Art for her BA and MFA, and is currently completing her graphic novel, The Book of Sarah (Myriad Editions 2019). Her edited volume, Graphic Details (McFarland) was awarded a Will Eisner Award (2015), The Susan Koppelman Prize (2015), and an AJS/Jordan Schnitzer Book Award (2016).