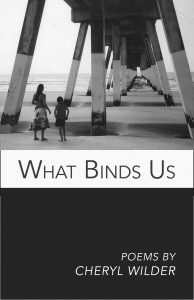 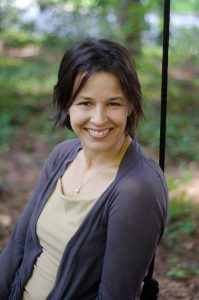 The central theme of Cheryl Wilder’s book of poems What Binds Us is family and connection in the face of disconnection. There are poems of estrangement and divorce, and also those of connection. Some of the most interesting poems contain more than one state simultaneously, such as “Foundation,” “Pupa,” and “A Way of Life.”

In both “Pupa” and “A Way of Life, ” Wilder’s concern is the heritage she is giving to her son.

I point at the spot where my son’s heart beats
and say, ‘there
I’m always right there.’ He’s five and learning how
to take the idea of me with him. I know love does not keep
people from leaving, but I don’t know what does, . . . (7)

When words fail, the narrator holds her small son as a tactile way of communicating their ongoing connection: “with my whole body I hold on / while remaining fragile enough for him to break through.”

The book also includes poems on caring for her grandmother, and how through caring she finds a modicum of stability in her own life. “Foundation” begins with the grandmother’s weakness:

with polyester and years of The Price is Right.” (15)

Then the poem shifts into their relationship and the daily realities of making soup and taking medications while the narrator finds herself in a more stable environment:

. . . The longest I ever lived
in one house was visits to my grandmother.

Barely an adult, I cared for her after bronchitis
flared the emphysema . . .

.   . . the oxygen machine
whirring her to sleep before I sat across the room on her couch,
both of us breathing and not breathing. (15)

That last line “both of us breathing and not breathing” puts the two of them in a healing proximity.

In the final poem of the book, “To my fiancé,” we get a sense of something new beginning.

from petals of a wildflower giving
passersby reassurance of forever

but we know they only smell the moment
one more step and it’s gone. (21)

The reader feels the delicate balance between connection and separation in the scent of the flowers.

I look forward to seeing future books by Cheryl Wilder where she can follow some of those moments.