My mother died the same week as J.D. Salinger and Howard Zinn. She was an original red diaper baby, born right after the Russian Revolution; her father was an early member of the American Communist Party. She said she wasn’t political, by which she meant she’d rather curl up with a good book than be handing out fliers on the street. I imagine my mother sitting between Salinger and Zinn on a banquette at the back of the boat sliding through the river Styx, as the men argue over the primacy of literature or politics. My mother turns her face from one to the other as their words volley past her. She doesn’t speak. She confessed to low self-esteem. What would she think she could say to these famous men?

My father thought emotions didn’t exist. My mother knew they existed, but she didn’t trust them. Her family was the stereotypical Jewish family, loud, argumentative, feuding. My father’s family appealed to her, she said, because it was so quiet. No arguing. But the family I grew up in was too quiet. When my parents argued, their low tones edged with tension, whose vibrations set my teeth on edge. I needed to escape it. When my mother and father went to a therapy group briefly, she took her knitting. Knitting without looking at her work, she couldn’t understand that others in the group felt knitting put a barrier between herself and them, between herself and her feelings.

My mother was the audience for my life. She listened to my complaints as a teenager without judgment, usually without argument. She let me down when I asked for help to pay for a shrink in my early 20s. This confirmed my long-held feeling that I could rely only on myself, that family was a biological accident and support came only from the friends I chose. But I continued to write letters to my mother, and she continued to write back.

Letters substituted for the conversations I imagined other women had with mothers more open emotionally. What prompted a four-pager from her when I was pregnant? Here is a fragment: “I was never very good at expressing myself constructively or lovingly—this continues to be my biggest problem…. I must confess I was holding back for another—maybe even dumber reason. I can still remember how overwhelmed I was when [your father’s]mother invited herself down to ‘take care’ of me and the new baby, when you were born. I so very much wanted to do it all myself. To prove, I guess, how capable I was. But also because I was afraid that I would be shown up for the incompetent that I really was.”

She could write about her feelings, but, like her knitting, writing distanced her from them. From her, I learned to keep my feelings hidden even from myself. Writing helps me let them escape. I talk to my daughter in ways I never did with my mother. I once asked whether she thought she had to be the perfect parent. My mother wrote: “I think you are! Both of you are so much more aware of [your daughter’s]emotional needs than I was of yours.”

I was the audience for my mother’s death. As she lay in the hospital, my sister asked if she’d like to do a guided meditation, and she nodded, her eyes closed. We sat on either side of her, each holding one of her hands. My sister spoke softly, urging her to visualize a quiet forest, a smooth lake, whatever scene calmed her. She added some spiritual words, not god, but not not-god. Her eyes still closed, our mother turned toward my sister’s voice, and when my sister stopped speaking, my mother turned toward me. I felt her asking, “And what do you think?” I wanted to offer an alternative, something more attuned to my mother’s, and my, lack of faith. But our parents had taught me not to recognize feelings until it was too late to express them. I muttered something vague and squeezed my mother’s hand.

She was hooked up to monitors flashing her pulse. I watched the skin at her neck flutter with each breath, which came at greater intervals as the numbers on the pulse monitor fell, from 52 to 43, 37, 25. The flutters ceased, the number was X. The air in the room was quieter, empty. Sadness came much later.

“My mother, Leah Jaffe, when she was around 60, living in Florida, and looking for extra money as a model in commercials or print ads (she had a few jobs). She lived to age 91.” 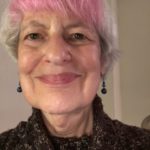 Sonia Jaffe Robbins is an editor, writer, and activist. She has written journalism, criticism, and memoir, with a chapter in “Red Diapers: Growing Up on the Communist Left.” Her work has been published in the Village Voice, Publishers Weekly, and other publications. She blogs at http://redemma1991.blogspot.com/ and tweets at @WarnfrCopyEditr.