From the age of fourteen, some weekends, I took the train from Gloucester, MA, where I lived with my mom, to North Station in Boston, on my way to my father’s house in Dorchester. The conductor called out Man-ches-tah, Man-ches-tah! Swam-scitt! and Beh-vah-lee Fahms! as we sped away from the rocky coastline toward the city. From there, I rode the Red Line in the direction of Ashmont, to Shawmut, my destination. One time, sitting on a molded blue plastic subway seat, overstuffed talisman of backpack held fast on my lap, I glanced at a man across from me, his legs spread wide. On one side of his too-short cut-offs sat the stiff arrow of his penis. At first I thought he forgot his underwear, the way I once did in Kindergarten, rushing so I wouldn’t miss the bus. All that day, I had pressed my knees together like hands in prayer. No. He knew. I can’t remember if I met his eyes. I pretended not to notice, afraid if I moved it would prove that I had. I was caught there, a frightened deer held in an oncoming glare. As my eyes traveled the horizontal map of subway stations above the grimy windows, half of me kept seeing inside his shorts, the way his legs were set in a gaping “V,” bright embarrassment rising on my face. I held my backpack tighter. I conjured each coming stop in my head until we reached it. I bit the inside of my cheek, hard. I thought I will not look 300 times. I looked directly into other people’s eyes, trying to share my confusion. It took so long before those silver doors opened and let me out, to dash across the asphalt and up the hill, not sure if I’d had a near miss or a collision, and I never, ever told anybody what happened because what if they thought I had wanted to see? 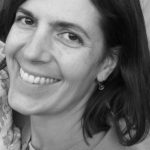 Rebecca Hart Olander’s poetry has appeared recently, or is forthcoming, in Yemassee Journal, Radar Poetry, and Ilanot Review, and her reviews have been published in Rain Taxi Review of Books, Solstice Literary Magazine, and Valparaiso Poetry Review. Rebecca teaches writing at Westfield State University and is the editor/director of Perugia Press.