Lines in the Woods by Ana C. H. Silva 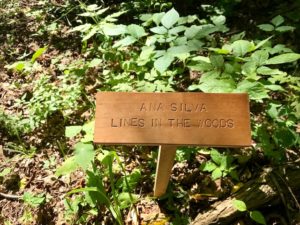 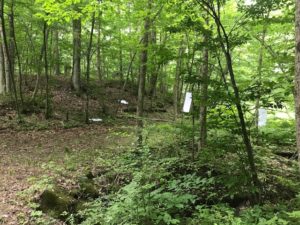 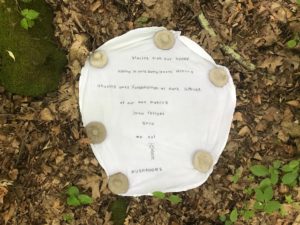 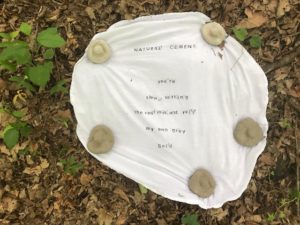 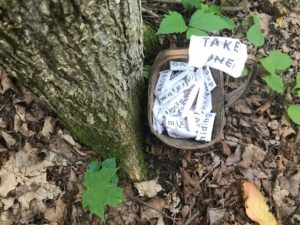 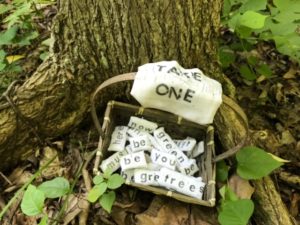 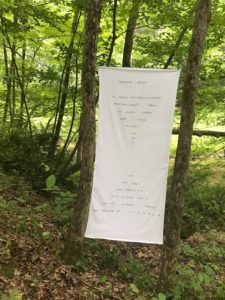 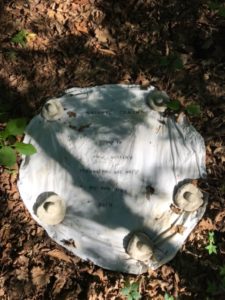 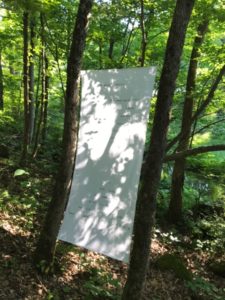 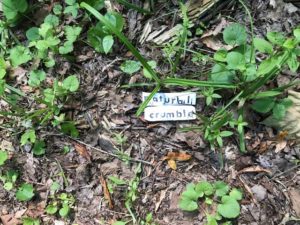 I chose the softest muslin I could find; one thick enough to withstand several washings and feel like one’s favorite pillowcase, apron, or handkerchief. What lasts? Bronze work, stone buildings, but also —as we find in every thrift and antique store— ceramic and cloth endure, too, far after the people who worked them. The ones who sewed and embroidered have generally been women, of all skin colors, times, and nationalities. I think my cloth poems in the woods were, in the end, an ode to these mostly forgotten and undervalued women. They washed, sewed, pinned, and left a good showing of their life’s work to dry in the wind while they did more work inside. What would it look like if some of it blew off the line and caught on branches in a faraway woods in the future?

Last fall I learned I could transform a portion of the woods at the Snyder Estate. Century House Historical Society, in Rosendale, NY, sponsors a summer outdoor sculpture exhibit. Over winter I read the history of the site, the vast cement production that enabled the growth of NYC and other towns, the underground nuclear shelters made for wealthy families, the mushrooms that were grown later in the empty mines. Some local history books were official-looking, full of academic references; others were more hobbyhorse, self-published, hand-stapled. So many male industrialists, family drama, the politics of towns vs. cities, the vagaries of economic realities. I wrote notes, but what caught my attention were the verbal oddities — a man named Canvass White, responsible for so much industrialization — the nickname “grey gold” for cement.

When I finally wrote my poems over a focused weekend in the spring, what came out were love poems to my husband Josh, infused with the language, characters, and references of the site. This felt right to me, and I went with it. The idea of writing poems solely about the history of the estate, using only facts and figures located in the past, anchored to no actual people or experience I held, would have had no real meaning to me. All the feminist novelists, artists, essayists, and philosophers I’ve absorbed over the years gave me license to locate my meaning in the domestic, in my lived life, in my actual loves.

The day of the opening, I marveled at the glass, stone, wood, metal, and other fashionings that were 22 different artists’ interpretations of curator Jeff Benjamin’s Eotechnic Sensorium. I enjoyed peeking over at people who lingered at Lines in the Woods, but I hoped no one tried too hard to puzzle out the layers of meaning. Instead I hoped they’d watch how the cloth made sense of a gust of wind or water ripple, like others who have noticed the shock of white cloth against the greys, browns and greens of woods. I wondered if, over time, the stamped ink would fade, the muslin would stain brown, green, maybe even pink with dirt, leaves, and mold. The ground poems might cover entirely over with earth, twigs and grass, and the hanging pieces rip in the windstorms. The baskets of word pillows would empty. All this would be much in keeping with domestic work, with its ephemeral quality and tendency to wear out, to use up, to need replenishing. But when I visited a month later, I was moved to see how new the cloth still looked; how, even if they’d been splashed with dirt spray during a heavy rain, the rains had also washed the cloths clean, the wind and sun had dried them flat again. Even the pieces on the ground maintained a glowy white around the circles of stains from the cement mushrooms I’d made. One visitor, instead of taking away their word pillow, had made a mini-poem on the ground with two: natural crumble. I thought this was wonderful, and left it. 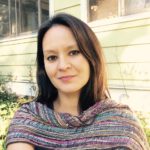