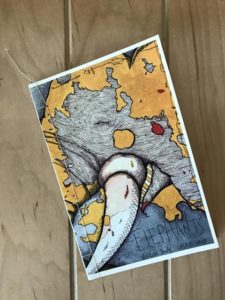 As part of a year-long series of chapbooks about humankind’s relationship to animals, poet Nicelle Davis and illustrator Cheryl Gross have collaborated on this entry, which explores the precarious place of elephants in the world of today. According to the publisher, Elephants “makes the leap that killing elephants marks the death of humanity … something of empathy and love dies with these sentinel beings.” The opening poem asks, “do you know there’ll soon be no / more elephants?” (3). This question follows the reader through the book, imploring the reader to pay attention to the destruction being wrought around them.

Each poem in the book is followed by an illustration of one or more elephants or tusks. Some of the elephants are laid over maps and blotched with continents, while others are injured or captive. Several of the illustrations evoke European colonial endeavors in Africa and Asia, and the devastation that followed. The poem “Wearing Death on the Outside Shows You’re not the One Bleeding” contains a stanza associating tusks with human baby teeth, and the art which follows it echoes this. Though it is not always immediately clear how each illustration connects to the poem preceding it, additional reflection can reveal layers and subtext in the poem. The art is not whimsical, but rather heavy, in keeping with the somber message of the book. The color red is featured prominently in many of the pieces.

The poems in this collection, however, do their share of heavy lifting. The poet plays with form and typeface to enhance the message of each piece, such as in the poem “Smell and Touch” which begins in large print and decreases steadily, dwindling mournfully in size until it ends “We / cannot, like elephants, sense who to run from, nor / where to run to, nor why we must run” (5). Other poems hug one side of the page, or sprawl across it. The arrangement of words creates in the reader an awareness of space and time that is further emphasized by many of the illustrations. The work is threaded throughout with nostalgia and loss, alongside the activist cry against brutality.

Poems such as “Image Search: Poaching Elephants” rail against consumerism and the role that capitalism has played in the destruction of elephant populations. In “An Etymology Lesson,” the speaker confronts the apathy of students:

there will be a world without elephants not by any fault
of their own. When I teach my students this, more than
half the class asks, Why should we care? How will this
affect me? (22)

This and other poems reflect on how to pass important lessons to the next generation, as a teacher and as a parent. In “Drawing Elephants,” the speaker struggles against willful ignorance by drawing brutal pictures of elephants killed for their tusks. “My son asks, why draw this? / Because it is true, I tell him. / Imagine other truths, he says” (28).

This and other poems are visceral and jarring. The speaker emphasizes the violence necessary to extract tusks, the waste of life, the putrefaction which wracks the abandoned carcasses of murdered elephants.

The circus comes under fire, as in “Dumbo Visits His Incarcerated Mother,” which seems to liken a circus to the prison system, or in “Drawing Elephants,” when the speaker’s son asks “Is it better to be safe or free?” and the speaker responds “I don’t know / if you can have one without the other” (30). Even the zoo in “An Etymology Lesson” is not right, since the elephant Shirley is isolated, without another elephant with which to socialize. It is only when she is released to an elephant sanctuary and reunited with others of her kind that Shirley can be safe and free. In the end, the book’s message is repeated: “there is no world / for us without elephant” (32).

This is not the first collaboration between Davis and Gross, who have created animated poems together, such as the unsettling In the Circus of You (2015), which was chosen Best Poetry Film at Indie Cork 2015. Both artists produce work which explores social equity issues in the world, and this chapbook is no different. Elephants is a collection that grapples with the destructive legacy of humanity, examining our role in the endangerment of elephants, and the greed that drove us to this point. Through poetry and art, the creators portray the moral and spiritual cost of poaching elephants to extinction, and call on the reader to recognize the beauty of these animals before it is too late.

Tessara Dudley is a poet-activist making art at the intersections, in hopes of building a better world. Her work has been published by Wordgathering, Minerva Rising, and Words Dance Publishing. Tessara can be found at http://tessaradudley.com