My Sons (on dead fathers, the Celestial mother & other mothers)

My son 4, said the trees are closer than the moon.
And the moon is flying in the sky. When the moon finds a
baby that it likes, it follows the baby all night. He already
knows the sound darkness makes, that space is
deceptive the way it makes you think it will hold
a body forever, or the way light, enters through
the window, feels like constellations or cloud cover
over the planet of his skin. Stars move with Spirit
& the street, clogged with leaves & rain, holds
empathy for the parts of body it can’t touch,
and my boy’s fatherless wild.

Cut from my belly, he knows the creaking
of ghosts in the kitchen—the way his other mother
used to bake cookies & live in the white house,
& his father, dead, makes messes on the counters.
He knows his other mother died in a crash on
Interstate 24. When questioned of his knowledge of other
mother, he says she came before me when he lived
with her & a dad & a younger brother. Never intending
to share my boy with another mother—my mouth,
full of air, full of space. A hole in sky.

III. Tired of borders defining us, when we want
to encounter Spirit we make sound. We call this
prayer. I am wild & scared. Sky holds hypothesis
in its clouds, & the moon/a god/ghosts enters
in silence. What enters as mother? Moon as
reverence / ghost as reverence / hearing voices as
reverence. Sky means body, Creation birth,
& a woman’s body, not a rib but the equal sign. 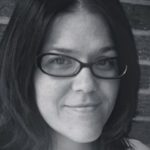 Stephanie Bryant Anderson earned her B.S. in English and Psychology from Austin Peay State University. Her poems have appeared or are forthcoming in Passages North, Birmingham Poetry Review, Mid-American Review and others. Her chapbook Monozygotic | Codependent (2015) is available from The Blue Hour Press. Currently Stephanie is completing an M.S. in Mental Health Counseling.