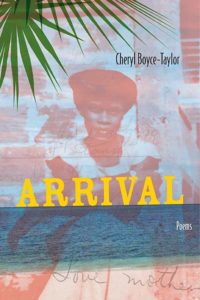 If your life were a poem, what form would it take? Which of us could claim the delicate and even couplet? Who the villanelle and who the quadrille? Would your life be a sonnet pretending order, only to turn shockingly on itself? Surely some lives insist on the brash swagger of spoken word.

Arrival, Cheryl Boyce Taylor’s fourth collection of poems, presented in five sections, is very much an unveiling of her life. Boyce-Taylor’s intentionality in crafting the collection as memoir is evident. Her presentation of a rich life, fully-lived is well-served by her choices. Section one, Riding the World, offers views of childhood. That August follows, with insight into mother, father, twin brother. I Name Gyal illustrates the migration of the young adolescent from Trinidad to New York. Spell tackles loves gained and loves lost, a mother’s love. The final section, Arrival, paradoxically presents departure from this realm. The sections in Arrival are pliable, fluid – they talk to each other, they echo, ricochet and dance. Perhaps if Boyce-Taylor were to cast her life as a poem, the form would be zuihitsu.

Riding the World opens with a girl’s sassy voice issuing a challenge in bold Trinidadian speech:

— if dem chiren hit me today
I go hit dem back what about you cherylallison,
what you go do (3)

This first poem presents the young girl growing up in Marabella, a small town in the south of Trinidad, details of home life, play, of growing pains. Yet at its core it’s a poem about challenges and dares. Throughout Arrival, Boyce-Taylor paints the challenges of shyness, poverty, chronic disease, mama and papa drama, love and death. Arrival is a woman looking back at stages of her life. It is a poet speaking back to childhood, after she has taken up the little girl’s challenge, after she has taken up the array of life’s precarious and unannounced challenges. Read on, because Arrival is a collection from a poet who “chews up” the challenges and crafts them into poetry.

The poet is ever-aware of the twinned nature of the life and art. Consider what we learn of Boyce-Taylor’s immediate family: a twin brother, stillborn; twin sons, one stillborn; a mother and father distanced from each other, literally and figuratively; a short-lived marriage to the father of her son; the love of a woman. The series of parallels in this life, the events that occur and recur, become organic guidelines for the narrative of Arrival. A central beauty of this work is how it meanders, twists, turns on itself, moving, moving, moving. So, while the sections are separated by headers and, on the surface separated by themes, it is easy to think of them coming from a single running brush. (The Japanese zuitsu – a form Boyce-Taylor has studied with award-winning poet Kimiko Hahn, the form’s chief American practitioner – is often translated as “running brush”. There are only three poems specifically tagged as zuitsu in Arrival but the collection’s ease of movement, the languid cadence of occur and recur, the indirect meditations on life, all gesture to the form).

Consider “I Name Gyal,” a poem of self-proclamation, of identity definition, of creating and claiming space in the world. I Name Gyal occurs in separate incarnations, labeled part one through part four. In Section I, the poem, comfortable in a Trinidadian childhood says, “I know who I am”. In Section III, newly transplanted to a New York City school, the poem is clad in “island colors proud proud” despite the fact that “the chiren laugh loud at she accent.” (40) A second time in Section III, the poem in this new world, carefully “remembers” who she is. In Section IV, Gyal is life force, primal power:

I am my own midwife, I birth myself
the daughter I always wanted
I am my best self braided gyal
drinking cocoa tea. (51)

The active, willful remembering of Gyal, part three, is constructed from a treasure trove of language, distinct Trinidadian vernacular – words, cadence and phrasing – integral to person. This gyal does the work to “remember to say, she bold face, fast an out-ah-place / remember I more bold than she” (p33). And make no mistake, the adult poet holds the language as precious too – precious for the culture, the connection, the beauty, yes, but precious above all for identity. Boyce-Taylor has foregrounded Trinidadian language at each phase of her life – on stage in performance, in her published work, in her Calypso Muse reading series (in existence for over a decade, this series is community building, poetry education, entertainment) and in the raising of her son, one Malik Taylor – who as hip-hop icon Phife Dawg proudly carried a spirit of Trini identity and voice in his lyrics and presence on the world stage.

The poems in Arrival do the work of memoir, yes. They paint images of a full life. Moreover, the poems in Arrival do the work of poetry. They are beautiful, carefully-crafted explorations of form, substance and style. They are specific, lyrical and colorful. They are the confident work of an experienced artist/teacher. And even as the work moves from strength to strength, some moments will stop you in your tracks. As a shameless mother’s boy and a hopeless romantic, for me In This Pure Light succeeds on a near genetic-code level in capturing the value of life and love.

Always in Arrival, Boyce-Taylor weaves the dare, the challenge and poem. She not only writes a manifesto on how she has lived her life, but perhaps she lays down a challenge for the reader to take up. From Zuihitsu on Eating Poems:

I eat poems for breakfast
sprinkle some on my honeydew melon
on my Inca red quinoa
I feed poems to my son he eats them
like heirloom tomatoes
later when he is gone I make murals of poems
each painted with the Bulgarian rose of tree bark
while the kettle hums I lure another string of words lithe like dragonflies
the wail of tribes ascending in the language of leaves. (7)

Anton Nimblett is the author of Sections of an Orange. His fiction and poetry appear in various literary journals. His reviews have appeared previously in The Caribbean Review of Books and sx salon.