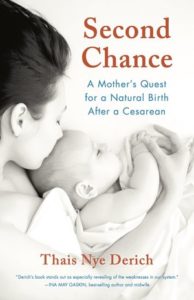 All too often, childbirth is depicted through the rosy lens of the birth’s afterglow: the mother gazing down at her swaddled infant at her breast, woozy and love drunk. Adrienne Rich argues, in Of Woman Born, that “As soon as a woman knows that a child is growing in her body, she falls under the power of theories, ideals, archetypes, descriptions of her new existence, almost none of which have come from other women.” Or, as Thais Nye Derich describes in her memoir, Second Chance: A Mother’s Quest for a Natural Birth After a Cesarean, she falls under the power of clinician-directed medical birth rather than one guided by the body’s own intuitive knowledge.

Derich believes that she adequately prepared in all necessary ways for the birth of her first son, Luke, and indeed, as she moves through the transition period of labor, all signs point to a normal, vaginal birth. She writes, “I am in such a trance that I don’t even know that I am pushing. The physical change feels so good. My groans get deeper. The baby is pressing down on me. My body has taken the driver’s seat, and it feels good” (16). But then her labor doesn’t progress according to protocol, and equipment and monitoring machinery are wheeled in, and when she sees the oxygen device and needles laid out on the cart beside her bed, she thinks, “Why is all this stuff here? Is something wrong? I suck in a deep breath. If a deer senses danger during birth, she sucks her baby back inside of her and walks to a safer patch of grass. I am a deer with no other place to go” (17).
Her cervix contracts from eight centimeters to six, labor slows, and Derich is pressured by nurses and her impatient doctor into a cesarean that leaves her traumatized and filled with shame and regret. She recounts the moment when she asks her husband Jake if he wants to watch the baby removed from her uterus, and his response reveals how far they are from the birth they’d imagined:

As his little, bloody head sticks out of my abdomen, they suction his nose and mouth.
“Are you going to look at him to see him come out?” I ask.
“I don’t think that I can handle that either,” Jake says. (53)

For the birth of her second son, Mikko, Derich allows herself to be guided by her body’s wisdom into a deeply transformative birth journey. She is determined to have a vaginal birth after cesarean (a VBAC), and to avoid premature medical interference, prepares for a home birth. At every turn, the medical establishment warns her against the risks of both a VBAC and of a home birth. At her cautionary appointment with a hospital nurse-midwife, the practitioner tells her, “I think midwives who perform vaginal births after a cesarean at home are reckless” (95) but Derich believes the risks outweigh the benefits of a natural childbirth.

As she prepares for this second birth, she arms herself with research, and aligns herself with seasoned midwives and holistic practitioners, though once again, she notes that her husband may not understand her deep need to have a natural childbirth despite the risks:

“I’d do anything not to have another cesarean.”
“Come on, was it really that bad?” He half smiles and lifts his palms up in a question. Suddenly, I realize that Jake and I are living two separate lives. He sees my struggle, but he doesn’t understand it.” (57)

While Jake is supportive, she realizes that she is the one who will give birth and it is her journey. As one of her midwives counsels, “You need to go deep within yourself and get the job done no matter what is happening around you” (112). Derich realizes that part of going deep means letting go of expectations and moving through her fears. She writes,

I didn’t go into Luke’s birth ready to die, but I respect the power and magnitude of giving birth now, and I know I have to be ready for anything….Being ready isn’t taking an armed stance and fighting away death; it’s softening and surrendering to whatever happens. It’s trusting and letting go when things don’t go as planned. (109)

Derich’s story telling is empowering and she gains strength and healing through her vulnerability on the page. However, she writes her story, too, in solidarity with other women and their birth stories, refusing to whitewash the difficulties while still celebrating the moments of joy. It is fitting that she ends her memoir balanced between these difficulties and the joys. While she had a successful VBAC homebirth, she was rushed to the hospital to remove her placenta, not part of her birth plan; yet, the final image is one of a family linked by love: “Full of trust and love, our sail will take us safely to a new land and whatever adventures await us there. But for now we’ll just float here together, hand in hand” (158).

Kerry Neville is the author of the short fiction collection Necessary Lies and the forthcoming collection Remember To Forget Me. Her fiction and essays are widely published in print and online journals. She is an Assistant Professor of Creative Writing at Georgia College and State University.