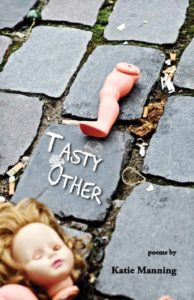 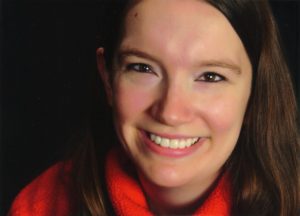 “For in that sleep…what dreams may come,” said Hamlet. He was speaking of death, but in Katie Manning’s new collection, Tasty Other, many of the poems stem from the way the hopes, fears, and hormones of pregnancy make themselves known through our subconscious and our dreamscapes. It’s the fear of the unknown: will I be a good mother? Will my baby be a boy or girl? Will my child be “normal” (whatever that means)? Manning’s poems channel some of the answers a mother-to-be might wake up with, answers which are by turn hilarious, frightening, and heartbreaking.

With an expectant mother’s worry about both baby and birth, Manning gives us “The Minor Mutation” (all poems in the collection with titles beginning with “The” are dream-inspired). The speaker here begins by tracking development “from tadpole/ to gerbil/ to tiny human,” the way we’ve grown to expect from doctors’ appointments and internet memes. Somehow, though, along the line, the baby in this piece grows into a horse:

It won’t come out for an extra year
and three months,
so you can enjoy your pregnancy even more.
The bad news is
your newborn will be at least
five feet tall.

The wry voice takes it all in: the exhausted take on how much longer? as well as the dread of I’m going to give birth to something that big? Though readers might never have had their dreams mutate their children in quite this way, the fears are universal.

Also universal is the fear of all pregnant women about their ability to mother a baby. In “The Fall,” Manning takes that fear to the extreme:

The spiraling fear and confusion here has to be something all mothers have experienced at some time. How could any of this happen when I am trying my hardest? Reading this, I both laughed and felt ashamed: it’s the eternal mother-conundrum, to try, and to feel that, somehow, we’ve failed.

Not all the pieces in Manning’s collection are dream-inspired, however. In “This Is Not a Hoax,” she bases the poem on the true story of Mary Toft, an 18th century English woman who claimed to have given birth to parts of a rabbit. Again, this is the story of the strangeness of pregnancy itself, when the unknown appears: “a long ear emerge[s]between her thighs, / a second ear, and then / the first of fifteen soft, slimy bunnies.” It’s no accident, either, that a woman should imagine herself the kind of birthing machine that a rabbit appears to be; women, who have been worn out and killed by frequent childbirth for centuries, have that historical understanding written, by now, into their DNA.

Manning addresses the fierce protective nature that children are known to draw to the fore in their mothers as well, in the poem “God in the Shower.” In this, the speaker imagines a situation where a train engineer faces an impossible choice when his son is trapped in bridge gears as a train approaches: to “save his son/ or save hundreds, maybe thousands of lives.” Because the man in the tale is “a metaphor for God,” he “lowers the bridge for the train.” The speaker, as a mother, rejects the metaphor and rejects the decision.

Could a mother crush
her son to save any number of people?
Not this mother. Not my son. Our story
is much more simple: train brakes scream,
whistle pitch falls, metal breaks water.
My son, safe in my arms every time.

So too do we, the readers, understand that, for those people, it’s just tough luck, because having carried that child through all those dreams and all those fears, a mother will sacrifice all for him every single time. Our children might give us nightmares, but they are ours, and we will protect them at the risk of all else.