Because our candidate—the woman—didn’t win.
Because my son is in 7th grade and kids can be cruel.
Because my son is biracial, I did not have the right words
when he came home and told me that some kids said
he would be deported, chanted Build the Wall
as he walked down the hall.
They were joking.
They didn’t mean it.
My son laughed.
Shrugged it off.

For a moment, I imagined the red lockers
of middle school were listening, the post-War
cement bricks and beige tile bearing witness.

My son is not me,
won’t make a fist if not angry. He is learning
how to navigate those halls, to go high
as they say.

There might have been something in him
the deeper physics of molecules breaking apart,
scattering at the cellular level
but hold it together.

But still, I imagine the darker version, the boy
who is not laughing, whose ears and eyes
and hair and skin closed his hand, felt
the vibration of air breaking the light,
who felt broken and broke back. 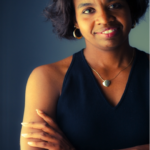 January Gill O’Neil is the executive director of the Massachusetts Poetry Festival and an assistant professor of English at Salem State University. She is the author of Misery Islands (2014) and Underlife (2009), both published by CavanKerry Press. A third poetry collection, Rewilding, will be published by CavanKerry Press in 2018. Misery Islands was selected by Mass Center for the Book as a Must-Read Book for 2015, and won the 2015 Massachusetts Book Award. In 2015, January was elected to the Association of Writers and Writing Programs’ (AWP) board of trustees. She lives with her two children in Beverly, MA.