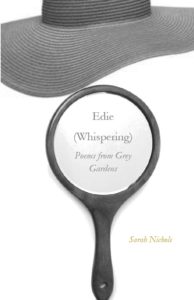 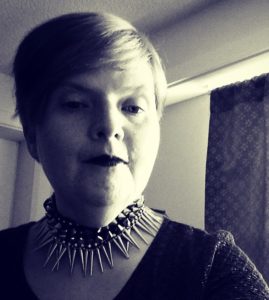 I’m not a fan of found poetry, so it was with some apprehension that I read the prefatory note by the author of this brief collection that “All of the poems in this volume are sourced from the dialogue transcripts of the documentary Grey Gardens (Albert and David Maysles 1976), and are spoken by either Edith Bouvier ‘Big Edie’ Beale or her daughter, Edie ‘Little Edie’ Beale. The transcripts appear in the book Grey Gardens by Sara and Rebekah Maysles (Free News Projects 2010).” My dislike and suspicion isn’t fueled by a belief that found poetry is unoriginal. Its concession that all language is unoriginal is actually what intrigues me about it. But in order to work well, found poetry needs to create something else beyond the language’s original context and claims, or to fashion it, form it so that even as it remains in context it tells us something new. Or at least that’s what I thought it was supposed to do well. But here in Edie (Whispering) I’ve learned that found poetry can do something else, something a bit subtler: It can create slight ripples in the original fabric, allow us to see the texture of the story somewhat differently. Nichols manages that in just 19 brief poems—some lyrical, some more prosaic. While the actual story of the eccentric mother-daughter pair and the documentary about them are hopelessly sad, Nichols poems straddle truth with a bit more vision, a bit more love.

There is a sure sense in this small but ambitious collection that the language wants to take us somewhere new. Through the details, both quotidian and surreal—panty hose over pants—an endearing and an enduring image from both the documentary about the Bouvier duo and the poems—Nichols takes us somewhere else. The book’s theme, the image it works and reworks, seems to be that of overwhelming stasis. We are caught in the mother and daughter’s reality and like them, we can’t escape it.
“Grey Gardens”:

Everything disappears in this place
and we
couldn’t possibly leave.
Night after night, morning
after morning, the ghosts
hold our breath.
What was the point of my
searching the line between
the past and the present?

This speaker is reasonable in a way that the character who speaks to us from the film is not. The poems place us squarely in the experiences here. I love “The Misses Beale and the Radio” poem which neatly conjures Emerson’s transparent eyeball and the electric energy of Margaret Fuller’s “Woman in the 19th Century” essay, it reveals its weirdly eccentric New England-y roots:

My one perfect eye
has the
power of god inside it, and
the afterlife is
filled with
electricity.
We heard that
on the radio.

Information about these two women’s lives filters through in these poems as sunshine through a cloud. Often, though the poems are shaped into crisp brief stanzas, a movement persists – inner dialogue moves outward until by the end of the poems the speaker has turned her head toward the camera and is speaking to us:

Don’t shroud
your mind in black.
shroud it
in cerise,
and
believe, really believe.

One somewhat stunning theme that emerges in such poems as “Old Fashioned Virtues” and “A Duet with Lobster and time” is the subject of American identity—who or what is American identity—can a lady who keeps cats who is nonetheless as “self sufficient” as any American really belong to this America? And if not, what is their real estate? Where do they belong? In an age we will remember as most divided, most complicated in terms of how and when we claim our American identity, Edie (Whispering) is an interesting read—these women don’t impose themselves as much as they wind themselves into a larger fabric of resistance. As this author tells it, that resistance has everything to do with how and when we claim memory, claim our stake in the larger experiment of living into ourselves. The poems seem to be asking what it means to be both unique and of a recurring part of an indelible pattern of loss. And where for these speakers there is really no way out, it is just as well, as out is not necessarily more riveting or more reassuring than the inner lives and experiences that bind them to each other.