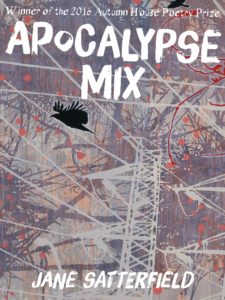 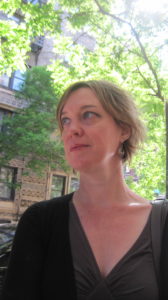 Award-winning poet Jane Satterfield’s fourth collection Apocalypse Mix differs in range, tone, and form from the Biblical apocalypse in the Book of Revelation. Satterfield does not use the epistolary form. Nor does she concentrate on punishment, plague upon plague, and separation of good from evil. Apocalypse Mix is more diffuse and layered. The apocalyptic seems rooted in the chaos and destruction caused by war, whether past or present, experienced directly or indirectly. Most often it startles by its juxtaposition with the comfortably familiar. Sometimes it is so tucked into routine daily life as to almost disappear. Yet it remains. The best of these poems alert us to its presence in ways that are unforgettable.

Two of the five sections of this book consist of seven poems each, a number important also to the Book of Revelation. These two sections are more tightly connected in content and form than the three longer sections. Section II, “The Bestiary,” focuses on animals, among them dogs, pigeons, mules, and horses, that served various roles in World War I to an extent not known previously or since. These spare free verse narrative poems offer a unique view of “the scale of pain” (34) in trench warfare where a pigeon

flew through heavy fire, arriving
at his loft with a bullet in his breast,
message dangling from
an injured leg (31).

The prose poems in Section IV are among the most elliptical in the book. Taken together, they cohere in that they all respond to visual artwork in the Migrant Universe series by Tanja Softić, one piece of which is on this book’s cover. This section is prefaced with Softić‘s artist’s statement that also serves to define the overall effect of Satterfield’s poems: “fragmented memories, adaptations, revival, and transformation” (52).
In the first, last, and center sections, current experiences are intertwined with enduring memories of destructive historical events. In “An Ideal for Living,” for example, the first person speaker is shopping, trying on clothes in a dressing room, and somehow a conversation with her daughter takes this sharp turn:

…pressed for an answer, I tell my daughter what
“joy division” is: nihilism, word play, doublespeak
for concentration camp prostitution wing (5).

Among the poems is a range in tone. They are in turn nostalgic, objective, elegiac, apprehensive, and sardonic. Humor provides relief, especially when it is self-deprecating. In “Combat-Ready Balm,” for example, the speaker gave her father a St. Christopher medal for protection when he was deployed to the Gulf War. She reflects on this gift:

…. Just like me to offer
an apocryphal saint as protection, a saint whose feast day
was dropped from Church record in the absence of any
historical evidence he’d ever existed” (48).

Phrases borrowed from Frank O’Hara, Theodore Roosevelt, and Virgil mix with clichés for a mocking effect in “Et in Arcadia Ego.”

there’s parking here and plenty of it, door-
to door, all the space your heart desires
for your much maligned SUV. No need
to clog yourself with praises of
the pastoral life (20).

There is also biting sarcasm. As the speaker in “Crossing the Shenandoah in Late Summer” recalls a family road trip, the experience mixes with the Civil War history of people from Union-held border states going south to join Confederates. She notes,

…. They fought for a life
that relied on men, women & children
shackled & transported (71).

Satterfield mixes into many other poems brief quotes from sources as varied as Roland Barthes, Larry Levis, Albert Camus and Virginia Woolf. In the final poem, the tone becomes conclusive and exclamatory. “O blue bottle, spilled ink— / Even dead you deliver a sting” (84).

Among the most poignant and unforgettable moments are in “Triptych.” In the first and third sections of this poem a woman recounts her experience of walking with her baby outside an embassy while her husband waited inside to get the child’s passport. Another woman, a stranger, reaches into the pram and touches the baby, calls the baby “beautiful” and “blessed” (11). This was in a time “before fear was everywhere” (10). The middle section of this poem flashes forward twenty years when the baby’s mother watches media coverage of a flag-burning at that same American Embassy but this time there is no mother and child, no admiring stranger.

The clear implication is that in our time fear seems to lurk everywhere. Jane Satterfield’s Apocalypse Mix, winner of the 2016 Autumn House Poetry Prize, maps this terrain and serves as measure, warning, and guide.

Margaret Rozga’s fourth book of poetry, Pestiferous Questions: A Life in Poems, will be published in 2017 by Lit Fest Press. Her work has appeared recently or is forthcoming in the Mom Egg Review, Los Angeles Art News and the anthologies The Undead and All We Can Hold.