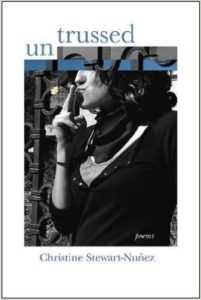 As her introduction to the evocative and carefully rendered poems of Untrussed, poet Christine Stewart- Nuñez uses a quote from Louise Glück who advises against poetry being read as simple “autobiography” and rather as narrative that “draws all the materials of life” including love with its risky and thrilling outcomes, and life experience/revelation that uses “the self as a laboratory in which to practice, master, what seem to you central dilemmas.” (qtd. in Grace Cavalieri’s The Last Word: The Poet and the Poem). The poetic construct that follows includes poems that alter episodes of intimacy with domestic ritual, a dramatic travelogue of both physical and emotional landmarks. These constitute the shared plateau and rites of a modern woman struggling with a mortal heart and the spirit of a heroine.

Exotic and domestic locations cleverly serve up metaphors for romance in several guises, as in “Lovebirds,” where the juxtaposition of a wedding party and a Russian monument dedicated to firearms rouses skeptical observations:

sweaty sheen of wedding work; their claws
scratch along cement as they shuffle toward
each other, feathered breasts touching as they meet.  (6)

In “Wind-Shifted City” the promise of imagined passion dissolves in disappointment as a quivering mirage:

Phoenix, you were like a lover
I didn’t love. At first, I adored
The dry heat, a throaty voice

just shy of ice—bleached
clean my need for water. (26)

The alarming beauty of the prairie is captured in “Struck” with its sensuous promise of fire and enflamed weather: “I assumed romance was cultivated / at play on the storming skin of Earth / metal key at the kite’s end.” She admits

Some poems flow effortlessly in execution (and leave us that way in response), their imagistic beauty matched by their poignancy. “Variation of Crane” begins with the birds descending, “black ink seeping / from twilight onto the Platte River’s / sandbars,” and continues to unfold in a series of descriptive scenes from the narrator’s marriage. Her comparisons are deftly and eloquently drawn:

Moving calligraphy, my husband:
clad in black, brown belt doubled
in back, he walks across sky-blue
carpet—every muscle’s flex
a flow as seamless as breath. (8)

During sleep “…his arm looped, / a cursive flourish penned around / my neck,” and in athletic practice he becomes “…an alphabet for grace.” Yet the poet also wonders at his readiness for danger, referring to how the instincts and persistence of birds—and people—can “…train a body to such / vigilance?” In “Fifth of July” questions of sustained passion and attraction rise through the fading smoke of fireworks that have “burst into orchids—red, white, and blue stamens / sizzling every seven / seconds against the black / blanket of sky. Outside / the bedroom window, smoke / tendrils kiss the Dipper / and orange hued orb. Do I / still stir you?” (23)
There are also Wonder Woman poems that follow the icon as she navigates life in and out of costume, and those with anesthetic auras in their language that float off the page in searing color and texture.

The very aspect of being “untrussed” reaches beyond the release of desire, pain, obligation. It presents the poet/narrator as emerging from an emotional chrysalis, braving the fate of relationships, personal reflection and rejuvenation, and maintaining the self as valuable “laboratory” to mark life’s most curious and challenging trials.